A Trip to Ptown That Brought Me to Life

Lately I’ve been very busy. The COVID-19 pandemic had shut down most of the world, but businesses and nightlife are opening back up again. And with more people getting the vaccine, I’m feeling quite inspired to go out and be a part of my own life again.

But I want to take the time to write more and tell you that despite the bad times, things do get better. I learned that from past experience—and that the story I want to continue for you now.

Let me take you back to the summer of 2017. I just turned 28 years old and was ready for more celebration throughout the week including the 4th of July, which is definitely a benefit of being born on the 3rd—your celebration goes longer, but isn’t overshadowed by the holiday. The cast of Male Call attended a pool party at my friend Rob’s, which I would consider the place to be, especially since there was a suggested donation to raise money to the Cape Cod AIDS Center.

The summer was turning out to be a blast. There was so much I was learning about myself. I was bonding with people like I had never bonded before. We would have our afternoon lunches and rainy day pizza parties. Boat rides with friends who were visiting the Cape. Taking days for whale watches. There were bike rides and nude beach days. It was way more than I could’ve asked for when describing a wonderful summer.

Like any good thing, my journey in Provincetown, MA, was coming to a close at the end of July. That didn’t mean my summer was over, it just meant I had more to look forward to. I returned to New York City, and it felt so busy compared to the cape. It was strange being back, but I kept busy. Within two weeks, I  buzzed my hair off and did some photo shoots. Then I  was invited to go back to Ptown for Carnival, which is their version of Pride. The story goes that Carnival first started when the town workers were so overtired that they decided to take to the streets and parade around and drink all of that day. Over time, it has become a huge event and theme week for the town.

I was invited by my friends Rob and Christopher to be on their float in the Carnival Parade. We rehearsed at Christopher’s house while I stayed at Rob’s house for the week. The theme in 2017 was Gods & Goddesses, so Christopher planned a Showgirls theme because in the movie, the casino show is called Goddess. We decided we’d wear Versace and call it “Versayce.” Another nod to movie. The plan was for me to be Donatella Versayce and perform “Donatella” by Lady Gaga. I felt so welcome and like such a major part of the group—especially with a winning float. 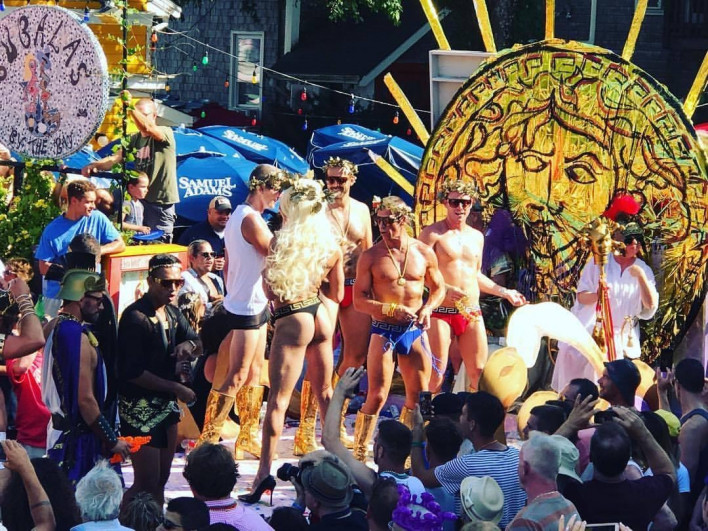 my booty on the float

The rest of the time in Ptown was spent dancing, smiling, being naked and celebrating who I am with friends being who they are: I felt no HIV stigma or triggered by my addiction in any way. I enjoyed being part of something so wonderful, and the experience sparked an idea: I would dedicate the month of October to working on my social media presence by building my following and putting out content that felt authentic to me.

Of course, my plans and goals would progress and change over time—sometimes working out and sometimes not—but at the end of summer 2017, I felt powerful and on top of the world. Whenever I hit a rough spot in my life, I try to remember this period and draw strength from it. I know that I will experience challenges and bad patches but that I can pull through. You never know where or where your next inspiring, life-changing moment will present itself. The trip to Provincetown really helped propel me forward.