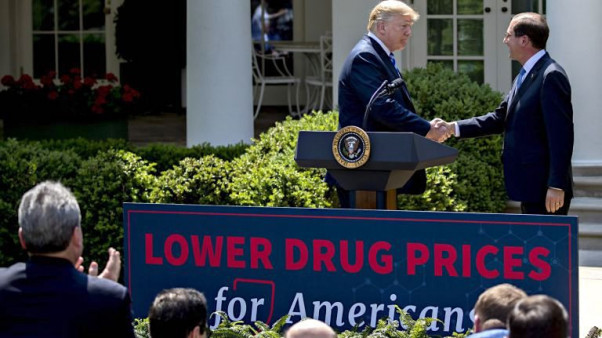 Neither does the focus on Pharmacy Benefits Managers.

This month, President Trump and Secretary of the Department of Health and Human Services Alex Azar unveiled the administration’s plan to lower prescription drug prices, but health policy experts are warning that the proposals fall short of the promises he made on the campaign trail and will do little to address the root causes of the issue. The plan received criticism for being too easy on pharmaceutical companies for their role in the seemingly exponential recent rise in drug prices. President Trump, who once accused the pharmaceutical industries of “getting away with murder” sang a more sympathetic tune during the May 11 unveiling. Several central tenets of his plan actually support the industry by aiming to increase competition and negotiating power—though not, however, directly for Medicare Part D, as then-candidate Trump touted as his plan during his campaign.

Secretary Azar further clarified the President’s plans in a speech, focusing mostly on the role of Pharmacy Benefits Managers (PBMs), companies that act as middlemen in drug negotiations between insurers and manufacturers. Azar will seek to restrict how much and from where PBMs can collect revenue during their negotiations. The lack of action regarding pharmaceutical manufacturers comes as no surprise to most, considering Secretary Azar’s history as a former industry leader himself.

Also as a part of the administration’s overall efforts to decrease drug prices, the Food and Drug Administration released new data last week about which pharmaceutical companies were potentially “gaming” the drug pricing system by blocking access for other corporations to develop generic (and cheaper) versions of their products.

This national conversation about drug pricing is one that has been ongoing in the HIV community for years, from the creation of the AIDS Drug Assistance Program to subsidize exorbitant HIV medication costs in the 1980s to the prohibitively high cost of one of the only FDA-approved PrEP drugs, Truvada. Most people living with and at risk for HIV are able to get the medications they need thanks to what HIV activist Tim Horn terms the “patchwork of coverage” in place to pay for HIV-related treatments; however, AIDS United will continue to monitor any legislative or regulatory changes proposed by this administration regarding drug pricing and will work to ensure access to these lifesaving drugs is only increased.