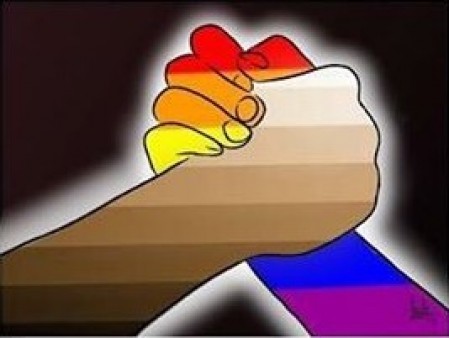 If you’re like me after this recent election, you’re probably tired of hearing the supposed president name that starts with a T. Something that seemed like a joke is now as we welcome a new commander-in-chief. It’s simply mind boggling that this country chose someone whose agenda was based on a platform of misogyny, racism and xenophobia and hate. Yet somehow, he was able to be elected as the 45th person to hold office. Looking at his win and lack of experience, what fears me the most are those who felt he was qualified enough to hold the position. It’s upsetting to know I share the same streets with people who, despite his message of hate, agree with his views. So what now? What do we do to prepare for what’s to come and how? Better yet, how do we prepare ourselves? And most important to me, can we challenge his hateful rhetoric without looking at our own hate?

The LGBT communities are gearing up for expected discrimination policies which will affect us. Although Trump has not public his set agenda, there already has been snapshots of what’s expected. It’s this unknown factor that has many, including myself, have been placed in the dark. Yet I have hope. I say this as a gay black man living with HIV. I have hope because as someone of color, myself and other people of color have seen Trumps before. We’ve been on the receiving end of elected and unelected officials who hold policies, based inequality over our heads. We’ve had Trumps who denied us access or fairness and placed us in an unfair justice system. As a gay black man, I’ve been witness to Trumps in our own LGBT community in which walls are built to keep out those who identify as black and gay. So as a gay person and of color, I’m used to being felt like I belong on the other side.

These words are not mean to be divisive but to serve as a history lesson. To remind people that Trump and his actions are not something we haven’t seen before but he’s a living embodiment of what was once whispered but now allowed showing itself freely. The “it’ is hate. This country has had a long history of hate, whether it was against blacks, gays, HIV positive, Jews, women, the list goes on.

Yet since the passing of gay marriage, the LGBT had the opportunity to focus on the unspoken truth which seems to keep dividing us. But once segments of the population received their prize of being able to be a bride or groom, everyone packed their toys and went home, leaving other issues on the table.

Now is the time to start doing something about it. Now is the time to start another movement and castrating the very thing which had been castrating us as an country.   It’s time to look at this current presidency and not just say, “Houston we have a problem”, but to look at ourselves in the mirror and question our participation in that problem. Donald Trump didn’t create hate, he simply put it in the light and wore it like a badge. As LGBT we need to do the same. We need to bring the hate which exists amongst us and by giving it we can work collectively to remove it.

We have to form that unity within the LGBT communities as we’ve now see what happens when it stands on a national platform. As a gay black I want to walk in spaces where my white Lesbian sisters are without being viewed as the enemy based on my race and gender. I don’t want the attachments of race or gender to be my prescription of why we can’t union. I want to be embraced by my gay black brothers and sisters, despite giving my heart to a man who is the whiteness of me. I want to talk protest, march, stand together or even enter a bar where the majority of gay white men enter and not be the exotic other and inflicted with the same racist brush we accuse Trump of using. I want to exclaim my HIV status without the pain of rejection, unfriending, swiping my photo to the left or any new means of making me invisible.

Yet it’s easier to look out than look in on the change we want.

Believe it or there’s a positive to Trump being elected, especially as it relates to the LGBT community. Not only does it provide a moment to look at our own discord within the community, but it also helps us re-find our path. Our job is not done and we’ve already bear witness to what happens when we walk away without truly reaching our promise.

We should be angry about the direction our country is going. We should rise up against the racist and hateful platform that is now guiding us. But I also hope we use this moment to recognize our unity will be short-lived if we don’t address our own Trump in the LGBT community. Knowing we will have the same hypocritical actions as people denouncing when we still hate.

Love does win and it can against Trump. But are we willing to do what we need to do in our own backyard to see that promised land?