Updates on People of Blogs Past

Recently I reconnected with my barista babe friends, Jenny and Lisa, who spent the summer away from C’ville but are now back in town. They used to work for my buddy, Irvin, at a local coffee shop. 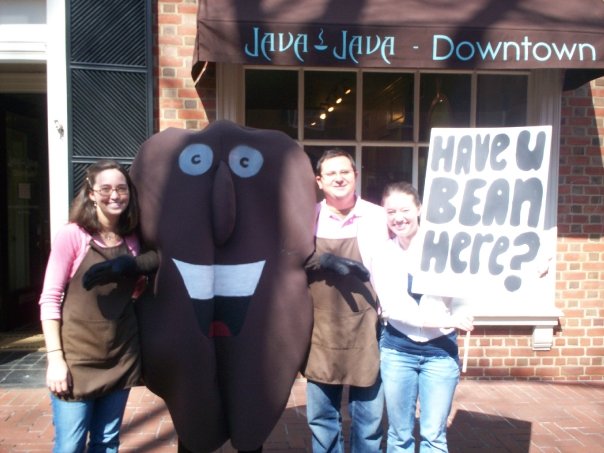 On April 1st, Jenny and Lisa were instrumental in helping me suprise Irvin on April Fool’s Day. That’s me in the giant bean costume. These days I’m trying to rent out my services to shops around town, but nobody’s biting on “The Bean”.

Around the same time we surprised Irvin, he surprised all of us with the news that he and his wife were expecting a baby, which arrived the day that I was reconnecting with Jenny and Lisa. We joked about Irvin ditching out on us, and then we decided to pop over and see how he was doing at the hospital.

“Oh!” Jenny said. “We should have had the Bean surprise Irvin!”

Well, when we got there and called up, Irvin came down because of a breastfeeding situation. It would have been such an Arrested Development moment if we’d planned the return of Bean and I just barged in dressed up like that, waving my hands around as Irvin tries to shield his family.

Since this is kind of an update on folks blog, I have to make a couple of points about the subjects of previous blogs.

River the Cat, who still needs to be adopted, is not a female as I stated in my previous River blog. He’s all male. Just had a little operation, no big deal, lots of animals get it done.

In June, I wrote a blog about my friends in Bella Morte and their summer touring. In the same blog, I interviewed a positoid who was set to walk across the country, from Washington state to Washington DC. I sent Michael Von Gaysen a message and haven’t heard back. I have also noticed that his site hasn’t been updated past Day 3

Michael, are you out there? 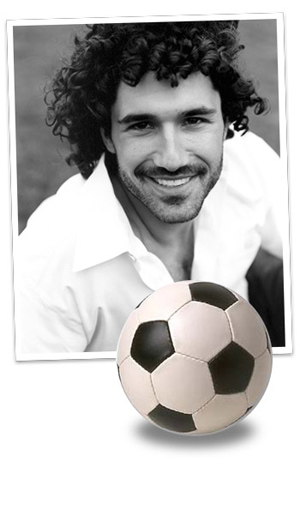 In a related story, Ethan Zohn, winner of Survivor Africa and the man too scared to bowl Shawn Decker, picked up the ball for Michael in a sense. Ethan is kicking a soccer ball from Boston to Washington DC, and like Michael, he plans to arrive in DC on December 1, World AIDS Day.

Michael was doing it to raise awareness for HIV. I think Ethan is doing it in an attempt to inherit my Campusport trophy. In fact, Campuspeak co-founder, TJ Sullivan, posted a status update that he defeated his son bowling, knowing that this could sway me come December when I have to pass the torch.

Last year, I had the honor of speaking in Beaumont, Texas, for the Triangle AIDS Network’s conference. This weekend, my thoughts have been with everyone I met last year, and I hope that anyone else who has been in the path of Hurricane Ike is safe as well.