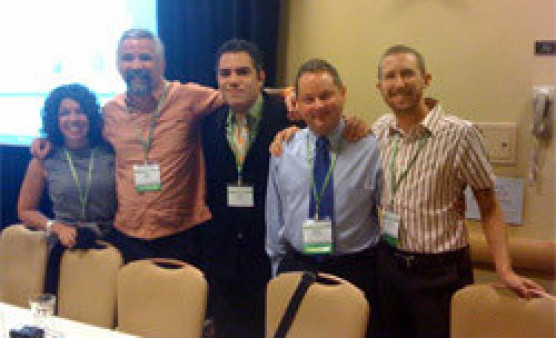 In the photo, from left: Samplin-Salgado, Ireland, me, Novak and Woodruff.

The CDC’s 2009 HIV Prevention Conference in Atlanta was inspirational. From the opening session (which included a wonderful speech by Regan Hofmann, POZ’s editor-in-chief) to the closing session, I saw a great mix of people dedicated to finding new methods for HIV prevention.

Using new media in HIV prevention was a theme throughout the conference, including a social media lab where people could drop in for hands-on peer-to-peer tutoring on using new media (I was a volunteer tutor). On Tuesday, August 25, Michelle Samplin-Salgado, new media strategist at AIDS.gov, moderated the session that I was a panelist on titled “Voices from the Public and Private Sector on Using New Media in Response to HIV/AIDS.”

In the photo, from left: Samplin-Salgado, Ireland, me, Novak and Woodruff.

I talked about the new media strategies we use here at POZ, including POZ TV and social networking sites such as Facebook and Twitter. I spent most of my time talking about lessons I learned in my first year as a blogger for the POZ Blogs.

We had a full audience for our panel and the social media lab was constantly busy while I was there. I hope that attendees to both found our suggestions useful.

Thanks to all of the folks at the CDC and at AIDS.gov for making my experience as a panelist so enjoyable!