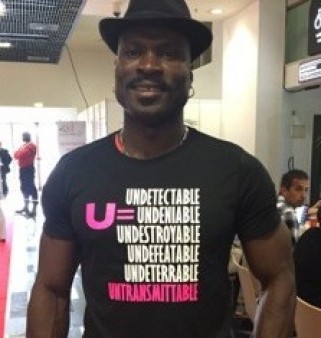 The Victory of U=U Must Be Shared Equally Among Us

U=U is a victory in that long journey of HIV/AIDS activism. Beyond that victory, we need to come together and take care of the reasons why some of our folks have not been able to reach U=U.

This is a guest blog by Carlos Idibouo, International HIV/AIDS advocate, GMT+ Representative of the Diaspora, member of the Steering Committee of the Key and Affected Population of the Paris Community Declaration, and global U=U spokesperson.

I wouldn’t be around if I were not who I am: strong, resilient and very active.

When I got diagnosed in April 2012, I had the feeling that I was prepared a long time ago to deal with HIV. In fact, I have never been afraid HIV itself. I was afraid of the social power that we all contributed to give to the virus. Yes, I was afraid of stigma, rejection and any kind of mental health issues that I could go through. And I went through the darkest period of my life. Being diagnosed right in the middle of the criminalization of non-disclosure of your status to your sexual partners—yes, that freaks you out! It seemed like 2012 was meant to show me the other face of life I ever thought could exist. Getting diagnosed, losing most of my stuff as I was moving back to Toronto from Montreal and losing my lover. HIV took away the man that I unconditionally loved and for whom I stood against any humiliation I was facing from the whole community, especially from my Black African and Caribbean community.

HIV pushed me straight up in the darkest and longest tunnel I thought would never end. When I finally thought my nightmares were over and that I could go back to the dating market, I realized I had to face another level of rejection: rejection from the gay community that I dedicated myself to educate, to support and to speak out for. I discovered that this community was even worse, the worst enemy of every single man that lives with HIV! Are you clean? What’s your HIV status? Where do you come from with that undetectable status? You are HIV positive. Period!

The good thing is that, despite all this meanness, I never lied about my HIV status. I think that openly saying it gave me the strength to better deal with the rejection I was going through. I was able to say no. I was able to say, eh! You don’t deserve my precious cum! I don’t want you to interfere between HIV my best friend and me! You better get tested and no matter the result of your test, you better take care of yourself because I am taking care of myself, and I am happy to be where I am.

Despite the resumption of this power over every single thing and person that was trying to put me down, I was still very scared that I could pass on the virus to someone if we had condomless sex. I was haunted by that idea, and I decided not to have sex anymore. Or if I ever did, it would have to be with someone who is HIV positive too.

Despite the resumption of this power over every single thing and person that was trying to put me down, I was still very scared that I could pass on the virus to someone if we happened to have condomless sex. I was haunted by that idea, and I decided not to have sex anymore. Or if I ever did, it would have to be with someone who is HIV positive too.

This is the kind of decision many HIV-negative people push us to make, and I made that decision quite often.

In the middle of that daily struggle, it came in my mind one day that I read an article back in 2008 that said, Someone living with HIV who received an efficient antiviral treatment cannot sexually pass on the virus. I already knew I was undetectable, but remembering that statement left me feeling disturbed. I chatted with /AIDS specialist, and his answer was that some studies were being conducted and everybody is waiting for the outcomes, and that until then, it’s better to have safe sex in order to avoid any trouble.

In the meantime, some people were posting messages about Undetectable Equals Untransmittable (U=U). The science had confirmed it! No doubt! I cried. I cried for the day I got diagnosed. I cried for losing my lover. I cried for the depression I went through. I cried and I cried. And I was able to put a face on that statement when I first met Bruce Richman in July last year as I was attending the International AIDS Society (IAS) conference in Paris as a member of the Steering Committee of the Key and Affected Population of the Paris Declaration.

I decided to be one of the visible figures of the U=U campaign. What does that mean for me? It means a beginning of another journey for me. I cannot pass on the virus to anyone—but for this to remain true, it requires that I manage myself well to stay undetectable. It means as a Black man, aware of the challenges faced by many HIV-positive people of my community, I need to take back my pilgrim’s stick. It means taking part of a debate around the fact that because of racism, discrimination, low income, substance abuse due to all the social disproportionalities faced by people from my community, a lot of them cannot reach the level of U=U. Suddenly, it seems like U=U belongs only to a category of people living with HIV. But we can certainly all get there!

As I reflect on my long years of activism, I came to the conclusion that I drew my strength from the fact that I never wanted to marginalize myself when it comes to things that determine my life. How could I be heard if I don’t take part the decision-making process? How could I raise awareness around my “isms” as a Black man if I stay in the corner waiting for those who have no clue of what I am struggling with on the daily basis to do it for me?

My contribution in many AIDS organizations in Canada as well as with the African Gay, MSM and Trans Positive Network at different levels gave me a better understanding of why as a Black African Queer man, I should be proud of being undetectable and .

On one I come from Ivory Coast, a West African country that had the highest seroprevalence of HIV for many years. The denial in which the Government kept the population at that time did not help at all. As a result of it, we experienced a high level of stigma and discrimination from I don’t want to eat in the same plate with a positive person to You are always sick. If I find out that it’s that nasty disease you are having, I will kill you!

On another I live in Canada, one of the first countries in the world that stepped forward by criminalizing people living with HIV if they don’t automatically disclose their status to sexual partners. But also a country where the Black African and Caribbean community is one of the most vulnerable community when it comes to about HIV.

I stand right in the middle of the intersection of all those social realities.

We have come a very long way, and U=U is certainly another victory as part of that long journey. But we need to come together again as one community to address the different reasons why some  folks have not been able to reach  U=U yet.

We have come a very long way, and U=U is certainly another victory as part of that long journey. Beyond that victory, we need to come again as one community to address the different reasons why some folks have not been able to reach the U=U yet.

As Réjean Thomas said, “We often think that we don’t have resources to reach our goals. We just need to rethink how to redistribute them and increase their accessibility.”

We need review our strategies and take in consideration the specific needs of marginalized communities. But to be able to reach that goal, we need to come together again like we did in the early hours of HIV/AIDS when we did not have treatments and when folks were dying like flies.

As my journey continues, I strongly wish to myself and to all of you, my people, that we could be around for the end of HIV. If not, let’s wish it together for our young sisters and brothers because we are working very hard to make it happen.

GMT+, Representative of the Diaspora

Prevention Access Campaign’s Undetectable = Untransmittable is a growing global community of HIV advocates, activists, researchers, and over 550 organizations from 71 countries uniting to clarify and disseminate the revolutionary but largely unknown fact that people living with HIV on effective treatment cannot sexually transmit HIV.  U=U was launched in early 2016 by a group of people living with HIV who created a consensus statement with global experts to clear up confusion about the groundbreaking science of U=U. It was the genesis of a movement that is changing the definition of what it means to live with HIV around the world.

“U=U is a simple but hugely important campaign based on a solid foundation of scientific evidence. It has already been successful in influencing public opinion, causing more people with HIV (and their friends and families) to comprehend that they can live long, healthy lives, have children, and never have to worry about passing on their infection to others. The CDC officially backing the science behind the campaign is another key step towards U=U being the most important message of 2017 in the fight against HIV." (The Lancet, November 2017)

Join the revolution! The majority of millions of people with HIV on effective treatment still do not know they cannot transmit HIV, and many do not have adequate access to the treatment and services they need to benefit from U=U. There are inaccurate information sites and many uninformed policymakers and healthcare workers who are not yet comfortable sharing this information, don’t yet know about  or don’t understand the significance of it.

Help change that narrative by sharing the groundbreaking news!

For more U=U resources and to learn how to take part, check out www.uequalsu.org

"U=U is “the campaign credited with beginning to change public perception of HIV transmissibility.” (The Washington Post, December 2017)