Since My Pet Virus has come out, I haven’t had one big, flashy media appearance... nothing!

In these troubling economic times, I sure could use any opportunity to reach the masses through the television, to not only raise awareness about HIV/AIDS but to boost book sales as well.

I never intended to embrace media whoredom back in 1996 I launched my little web site. Then I was a young buck from Waynesboro, figuring that people knew everything there was to know about HIV. For me, the site was about being breaking my cone of silence about my pet virus, and utilizing my blossoming HTML skills. (LOTS of blinking things.)

Shortly thereafter, Poz Magazine called, then MTV... and after Gwenn and I started educating together in 2000, we’ve been in numerous educational videos. But since the book came out in the fall of 2006, nothing.

Yesterday I was invited to be a part of an educational video. One that has nothing to do with my pet virus. More of an educational opportunity about my bleeding disorder, hemophilia. Meet my friend, Erin Weed, founder of Girls Fight Back.

In my usual smartass ways, I’ve been taunting Erin since our speaking paths crossed in 2001. Like when she posts pictures of giving self-defense seminars, I’ll be there to quip. Such as... 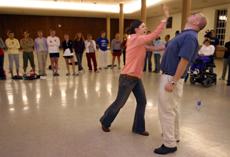 Shawn writes: “Never, ever, look down when Erin tells you ya got something on your shirt.”
Without fail, if I see Erin uploading pictures I’m there to comment. When she posted her impressive video, I told her to leave Daft Punk alone. She responded with an invitation:

“I’m looking for my next subject for Stick Fighting Part Two. I was thinking we could test out your latest hemophilia meds, and see if those crazy platelets of yours could stand a friendly beating. You game?”

I’ve known fear like I felt in the moment I read that Facebook Wall post... then I got to thinking- why not? If I can somehow manage to survive the attack, I could get the National Hemophilia Foundation and my buddies at American Home Federation to get this story on the wire... then maybe the Associated Press would pick it up, O’Reilly might get pissed and boom- book sales.

Desperate financial times call for desperate measures. So here, on my blog, I am responding publicly to my friend’s invitation: Erin, I accept the challenge. 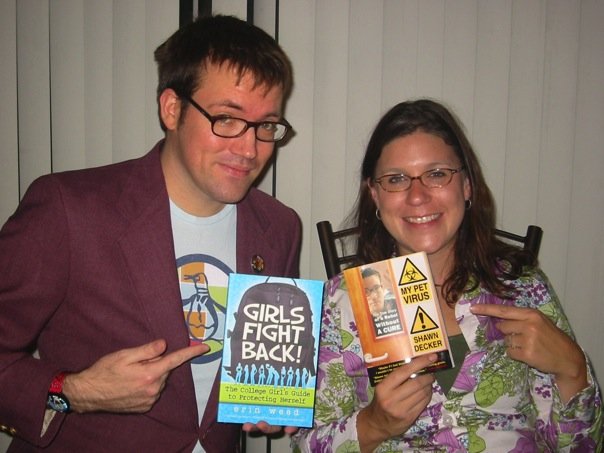 Erin and Shawn in happier times, in the photo that will be shown on Nancy Grace ten thousand times.