Voting in the Midterms Is HIV Advocacy

Just think back on how the past 20 months have impacted health care, Medicaid, LGBTQ rights and more.

For anyone who is reading this who has yet to vote in the 2018 midterm elections and isn’t 100% sure that they are going to vote because they’re not quite sure if it’s worth it or if it will make a difference, we want you to think back on everything that has happened over the last 20 months.

We want you to remember the amount of blood, sweat, and tears that you poured into fighting the repeal of the Affordable Care Act and the continued attacks on Medicaid by members of Congress and the Trump administration and to remember the feeling you got when you realized that your fundamental right to health care was, and is, at constant risk of being taken away from you. We want you to remember the horror and fear that hit you when you first heard that our government wanted to ban people from entry into the United States based on their faith or to keep them from becoming citizens because they weren’t rich enough to pay for their own health care. 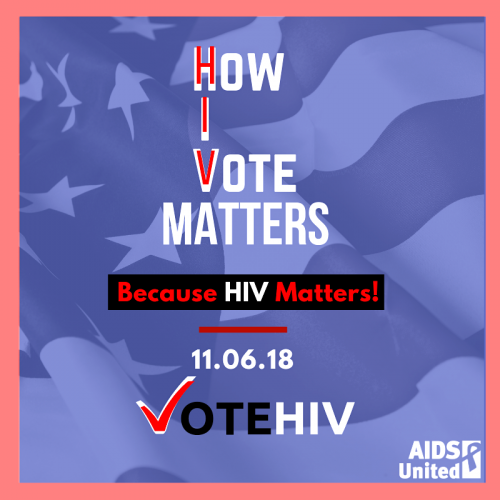 We want you to consider all of these things because none of them had to happen. And yet, they did happen and will continue to happen until the HIV advocacy community and our millions of allies who believe in the universal right to health care and dignity and freedom from discrimination based on race, sex, gender, religion, disability status, or nation of origin come together and demand that our representatives in Washington are beholden to us and not the other way around. We must advocate for ourselves and one another at the polls and outside of them.

Voting is HIV advocacy. It certainly isn’t the only form of HIV advocacy, but without it, we will never achieve all that is necessary to end the epidemic in this country and across the globe. If you’ve already voted, go out and make sure your friends and family have all voted as well, and then join Positive Women’s Network – USA’s Get Out The Vote community to find new ways to get involved. If you haven’t voted, then make a plan for yourself. Use AIDS United’s Election Resource Center to figure out where your polling place is, when early voting hours are, what candidates and issues you want to support, and how you’re going to get to the polls.

It may not feel like it, but filling in those little boxes on that ballot could be the loudest, most impactful statement you make all year. Join us—be an HIV voter and make sure all our voices are heard in the halls of power in the next Congress and beyond. Vote like your life depends on it, because, for many of us, it does.