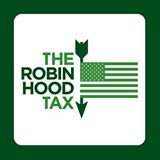 Like the age-old hero Robin Hood, HIV activists are playing a leading role in the effort to right the scales in our country--where the wealthy continue to benefit from tax breaks, while critical programs and services are cut to balance the deficit remaining in our nation’s budget--in the aftermath of the 2008 financial crisis and recession. Since 2008, AIDS advocacy groups have been working with labor, health, environmental and other social justice activists from around the country to demand a tiny tax (of 0.5%) on financial transactions by the banks, hedge funds and the rest of the financial sector that will generate hundreds of billions of dollars for the HIV response, expanding access to public housing and health care, mitigating against the impacts of climate change, and other important social goods.

AIDS activists have a formidable track record of going up against powerful corporate giants, like big Pharma, in an effort to advance the rights of the marginalized and poor.  Now, at a time when resources for the HIV response seem to be declining just as science is showing us that we can actually end the AIDS pandemic, we are putting this experience to good use once again.

We have made momentous strides in the campaign, with a Robin Hood Tax bill introduced in both the House (H.R. 1464) and the Senate (S.1371) in early 2015, and with senior-ranking House and Senate officials (including Presidential-hopeful Senator Bernie Sanders), now backing the idea. Join us as we tell our government how they can step up to the plate to mobilize the funding needed to end this epidemic, which has already claimed too many lives and gone on for far too long.