Where Have All the Funders Gone?

Our movement needs a significant influx of private sector funding and leadership if we are to end the HIV epidemic in America.

On October 28 & 29, donors will come together for Funders Concerned About AIDS AIDS Philanthropy Summit. 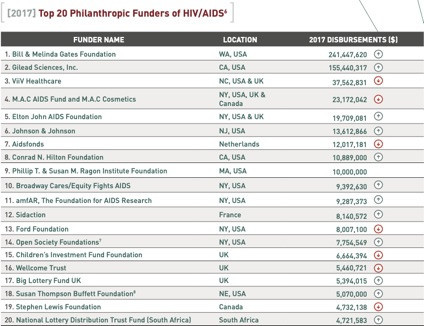 Here are the top 10 funders of the US HIV/AIDS epidemic. Eighty percent of the domestic HIV funding comes from the pharmaceutical industry. 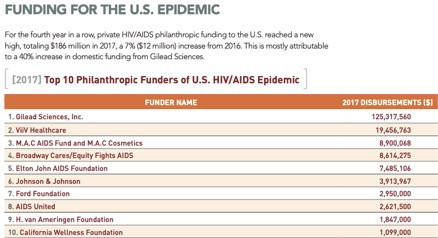 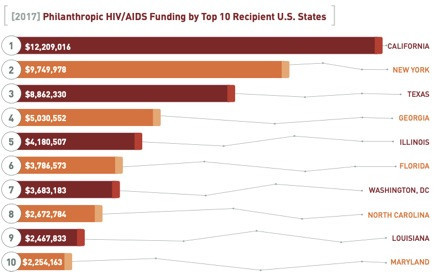 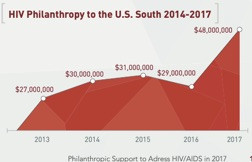 All of the above data comes from Funders Concerned About AIDS signature report, Philanthropic Support to Address HIV/AIDS.

Our movement needs a significant influx of private sector funding and leadership if we are to end the HIV epidemic in America. Government support can only do so much and has significant limitations. Private industry, foundations, and donors need to support what the government cannot. This is a once in a generation opportunity to end an epidemic.

Ending the HIV epidemic in America requires culturally-responsive and sustained engagement in health care and adherence to meds for the majority of the 500,000 people living with HIV who have fallen out of care, are unaware of their HIV status, or have not achieved an undetectable viral load. Additionally, the federal plan to end the HIV epidemic in America has set a goal to get around 900,000 more people on PrEP. Does the existing HIV infrastructure have the capacity to serve 1.4 million more people? Is this kind of expansion possible without a significant increase in private sector support?

Where are the business champions? I do not naively believe that we can do it by ourselves. We cannot. Corporations, foundations, and major donors are needed now more than ever. Our movement needs private sector support and leadership. In the past, CEOs like Bob Haas from Levi Strauss would make the case for HIV to his peers. Where are the CEOs working with community to end the epidemic? Other than the pharmaceutical industry, they all seem to be gone. John Dempsey, it’s time to come back to help finish the job.

According to Funders Concerned About AIDS, “For the fourth year in a role, private HIV/AIDS philanthropy to the US has reached a new high, totaling $186 million in 2017, a 7% ($12 million) increase from 2016. This is mostly attributable to a 40% increase in domestic funding from Gilead Sciences.” In the near future, I will discuss the racial justice component to funding, but for now I just wanted to share the numbers.