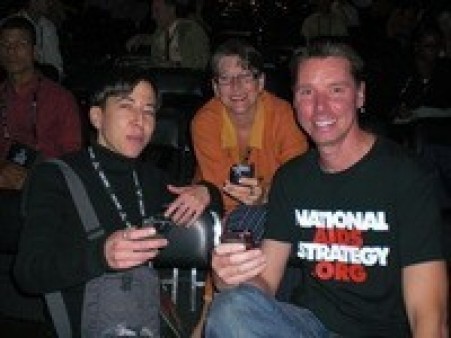 What will it take to achieve President Obama’s National HIV/AIDS Strategy for 2010-2015?

The following remarks were presented at the 2010 International AIDS Conference in Vienna, Austria as part of the Regional Session on Canada & United States for a section entitled Current Issues & Future Directions: USA.

"The United States will become a place where new HIV infections are rare and when they do occur, every person regardless of age, gender, race/ethnicity, sexual orientation, gender identity, or socio-economic circumstance, will have unfettered access to high quality, life-extending care, free from stigma and discrimination.

As a longtime AIDS advocate, I find it useful in efforts to realize a progressive policy agenda that lives up to these inspirational words.

It details specific metrics of success, requires annual progress reports, and assigns responsibility.  Most importantly, the President stands behind his government’s plan, which he described in an HIV/AIDS address he made last week.

It gives us an authoritative, critical analysis of the state of the epidemic in our country and what the minimum is that must be done based on the strongest available evidence.

The plan will strive to help 132,000 individuals living with HIV/AIDS learn their status and immediately link to continuous care.  And the number of HIV-positive people who are stably housed and adherent to HIV treatments would also increase.  The plan pledges greater transparency, coordination, and efficiency and seeks to align efforts with the populations and geographic areas of greatest need.

While current resources will need to be aligned with the plan, existing funding alone cannot do the job.  Federal and state governments will need to commit considerably more to realize the Strategy’s measures of success.   The government will also need to mobilize policymakers and the private sector to care more and do more in the fight against HIV/AIDS.

Success is by no means assured and given the severe impact of the economic recession on communities across the U.S., our country could well see transmission rates, prevalence, and care- access worsen.

While an array of interventions may be deployed to reduce HIV transmissions over time, doing so quickly has an economic advantage by slowing the rate of growth in HIV prevalence and therefore achieving greater savings on lifetime costs.

But how exactly can we work together to ensure its success?  I have four ideas to share that I’ve already begun to make to federal officials and you should as well.

We need to sell the Strategy to politicians and the American people: I believe in this Strategy and I think it is an eloquent, evidence-based public health plan. If fully implemented, it will help us manage our way out of the current crisis we are in.  But I fear it falls short of being an informed political strategy.  I’m not convince the general public in the U.S. cares about HIV/AIDS or that we are making salient points people can relate to about the benefits of expanded HIV prevention and care efforts.

In 2008, at this very conference, we showed that new infections are actually 40% higher than previously estimated.  We anticipated that such information would compel greater awareness and support.  We were wrong and must face the fact that the numbers of HIV infections, numbers of AIDS cases, disparities, and many of the metrics we collect are not swaying public opinion.

We need new paradigms to recapture urgency in HIV/AIDS and explain why controlling this epidemic is broadly beneficial.  This is particularly important as we concentrate our efforts on the populations most affected but who also are among the most disenfranchised politically and economically.

We speak in riddles ... of powerful medications, of a potentially deadly yet controllable virus, of the virtues of being HIV free in a hopeful world for those infected.

We need to recapture some relevance to keep this fight in the hearts and minds of the public.

Strong leadership at all levels: I commend Jeff Crowley, his team, and other federal officials for pulling together such a strong, ambitious plan but the work has only just begun.  We must move quickly and aggressively toward implementation of this plan to stay relevant and credible.

We call on President Barack Obama himself to detail progress made on the Strategy at the 19th International AIDS Conference in July 2012 in Washington, DC, our nation’s capital.  By then we will be nearly half way through the five-year period of the Strategy and expect to see nearly half the progress.

In this recession, states have cut nearly $200 million for HIV prevention and care programs and federal funding has not keep pace with the needs.  One need only look toward escalating incidence rates and poor health outcomes to see the disparities.  Most recently the AIDS Drug Assistance Program crisis has shined a light on the inequities and the challenges of serving greater numbers of people with fewer and fewer resources.

I also suggest that members of Congress consult with the nonpartisan Congressional Budget Office to tell us the true cost of realizing this Strategy.  We need to know what it will take to fully implement this plan if we are to achieve it.

We need every state in the U.S. to provide antiretroviral access through their AIDS Drug Assistance Programs to all people living at or below 350% of federal poverty and, recognizing that ARV medications are a lifetime commitment, support states in sustaining their program if their income eligibility is higher. If ARV access is assured, expansion of test/linkage/care models is truly possible.

And finally we need to refine our data systems to ensure we can quickly monitor the Strategy’s indicators of success and course-correct as needed.

Global leadership: PEPFAR is held as a model in the Strategy for effective implementation, coordination, and quick results.  If we are to look toward and learn from our bilateral activities on AIDS to inform our work domestically, we must sustain and grow our global commitments. This means making good on our financial promises and motivating the other wealthy nations of the world to do their part.

Look beyond AIDS: I’m delighted the White House involved people living with HIV, like me, advocates and other stakeholders in the development of the Strategy.  I believe our input strengthened the plan and I hope federal implementers will continue to rely on our expertise.

We know all too well that structural and societal forces shape the epidemic, as much or more than individual decisions, which is why we need government to improve structural interventions that look at reforming entire systems that help make people vulnerable to HIV.

In closing, President Obama’s remarks last week on the Strategy are illuminating and sobering: whether we will marshal our resources and the political will to confront a tragedy that is preventable."