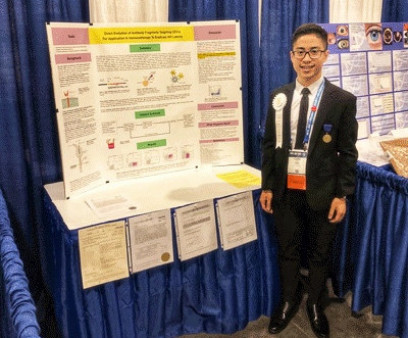 The following post is by Long “Andrew” Ngo, age 18, won the third award in cellular and molecular biology in the International Science and Engineering Fair (ISEF) 2019—the world’s largest international pre-college science competition—for his project titled “Direct Evolution of Antibody Fragments Targeting CD32a for Application in Immunotherapy to Eradicate HIV Latency.” A program of Society for Science & the Public, ISEF brings together approximately 1,800 high school students from more than 80 countries, regions, and territories each year to showcase their independent research and compete for more than $5 million in prizes.

When I arrived in the United States four years ago from Vietnam, I came with a burning passion for science. I was born in an exciting time when science is advancing faster than ever, but I knew that I could not take it for granted. I did not want to wait until I was in college, so I started doing science research as a high school student.

One of the major scientific problems that has always intrigued me is finding the cure for HIV. With antiretroviral therapy, infected cells are eradicated, but a small number of them survive and become the “reservoir.” While research has shown that [a viral load] can be suppressed and that undetectable equals untransmittable, HIV stigma remains globally, especially where I came from. I want to find a cure, and I hope to alleviate the burden that people living with HIV, including many of whom I know, are going through. After learning about immunotherapy and following the news about a group of scientists in France who found a potential “footprint” surface protein of HIV reservoirs, CD32a, I immediately thought of an idea. I can take the body’s healthy immune cells and genetically harness them to recognize the footprint of the HIV reservoir and eradicate it. That is a potential cure for HIV!

For me, the significance of this project extends beyond the science involved. When I first started my research, I spent countless hours reading professional science journals even though English is my second language. I developed a depth of knowledge, but I could not find any lab to host me due to my visa status. With my limited English ability and cultural understanding back then, it seemed impossible to find a mentor. It was not until the end of my junior year in high school when I met Dr. Lawrence A. Stern, who was a post-doc at City of Hope and an expert in protein engineering. We connected at a research conference I attended using a travel grant. Dr. Stern agreed to mentor me via email since he was based in a different state. I also managed to persuade my high school’s administration to allow me to use the school’s biology lab for my project. I finally started my experimentation in the fall of my senior year, after nearly two years of my persistence to make my project happen.

During my week at the International Science and Engineering Fair 2019, I was so thrilled to meet other like-minded students who are going to be scientific leaders in the future. I hope that other young students, who are passionate about finding the cure for HIV or other fields of science, step out of their comfort zones and be bold. None of us can find the cure for HIV or face other scientific issues alone; a diversity of talents will be what the world needs.