World AIDS Day is observed globally on December 1st each year for people to unite and recommit to the fight against HIV; show support for people living with it; and commemorate those who have died. World AIDS Day was the first ever global health day, and it remains important because it reminds the public and government that HIV has not gone away—that there is still a vital need for funding, research, increased awareness, fighting prejudice, and improving education. More than 35 million people worldwide have died because of HIV, making it one of the most destructive pandemics in history.

This year’s National Leadership Recognition Award will be presented to Rick Welts, President and Chief Operating Officer for the Golden State Warriors. As the first prominent male executive in professional sports to announce his sexual orientation so publicly, Rick has had a profound impact on how the nation—and the world—views the LGBT community and AIDS. The stigma attached to the LGBT community and AIDS is a significant part of why the epidemic rages on, and as a role model to many, Rick’s courageous decision to come out publicly delivered a significant blow to the stigma that fuels the spread of HIV and diminishes the self-esteem of LGBT youth in particular.

The National AIDS Memorial’s World AIDS Day observance is our nation’s preeminent World AIDS Day event, and is a core program of the organization. Thanks to the unwavering support of our underwriting partners over many years, we have produced the World AIDS Day National Observance as a courtesy to the community, open to the public, free of charge.

The observance serves to remember those who have died; acknowledge national leaders and unsung heroes; raise awareness about the ongoing impact of HIV/AIDS; and award emerging young leaders in the fight to end it through our Pedro Zamora Young Leaders Scholarship. Attendees include individuals from local & national communities (many HIV positive and long-term AIDS survivors); medical & social service professionals; AIDS service organizations and their clients; university and high school students; and community and political leaders. 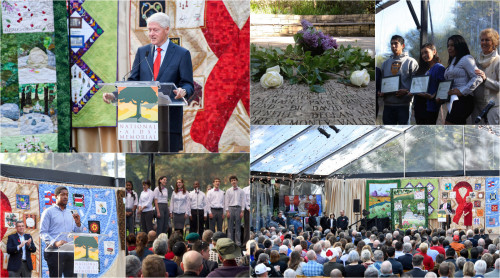