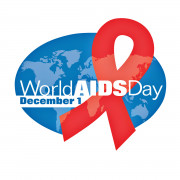 Let’s get back to the basics! Help Chase Brexton take our Giving Tuesday offline and in person to raise critical funds for our patients.

Founded in Baltimore’s Mt. Vernon neighborhood in 1978, Chase Brexton began as a volunteer-run gay men’s health clinic. Our work took on a new and difficult challenge in the early1980s when we became one of the first clinics on the front lines of the fight against HIV and AIDS.

Approximately 1.1 million people in the U.S. are living with HIV today. About 15 percent of them (1 in 7) are unaware they are infected. Globally, there are an estimated 36.7 million people who have the virus. Despite the virus only being identified in 1984, more than 35 million people have died of HIV or AIDS, making it one of the most destructive pandemics in history.

World AIDS Day, designated on December 1st every year since 1988, is an international day dedicated to raising awareness of the AIDS pandemic caused by the spread of HIV infection and mourning those who have died of the disease.

World AIDS Day is important because it reminds the public and government that HIV has not gone away – there is still a vital need to raise money, increase awareness, fight prejudice and improve education.