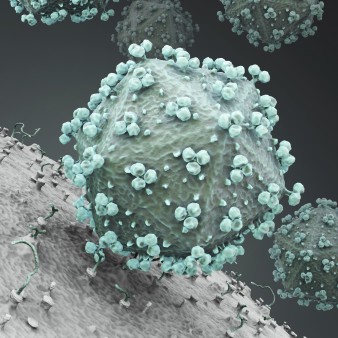 The Campbell Foundation awarded a $75,000 grant to Irwin Chaiken, PhD, for his work on developing a long-acting treatment that also targets and kills HIV hiding out in latent reservoirs in the body.

According to a Campbell press release, Chaiken and his team of researchers at Drexel University College of Medicine in Philadelphia are using specially designed molecules that target a protein on the surface of HIV (the virus needs this protein to penetrate the cell and begin replicating). What’s more, the so-called killer peptide treatment lasts longer and would not require daily oral doses.

“Achieving full viral suppression of HIV has proven difficult, even in an age of effective drug regimens,” said Campbell Foundation executive director Ken Rapkin, in the press release. “This research team will look into blocking HIV-1 entry and inhibit HIV replication in the latent reservoirs that harbor the virus. The goal of developing a long-acting antiretroviral would be key to the overall health of those with HIV as well as reducing the possibility of transmission.”

Chaiken’s team is looking into an HIV treatment based on lipsomal drug delivery systems. Liposomes are tiny bubbles made out of the same material found in cell walls; these bubbles can be filled with medicines.