Deciding to start HIV treatment—and figuring out which drugs to start with—can be a daunting decision to make. Learning all you can about the pros and cons of your various treatment options is your best weapon in the fight against HIV. The following information will help you communicate effectively with your doctor as you discuss your treatment options.

Why is treatment necessary?
If HIV is allowed to reproduce, or “replicate,” inside the body, it will cause damage to the immune system. Ultimately, the immune system gets so weak that the body becomes vulnerable to other diseases. This is the point at which a person is usually diagnosed with AIDS, and the other diseases they get can eventually cause death. For adults who live in wealthy nations—such as the United States—the average time between becoming infected with HIV and the development of AIDS is 10 years.

This does not, however, include people who take HIV medication. Clinical trials have repeatedly shown that antiretrovirals can keep people with HIV alive longer. In fact, research shows that people who who start HIV treatment early have a normal life expectancy.


People living with the virus should seriously consider starting treatment as soon as they’re diagnosed. Not only does immediately going on HIV treatment help keep viral load low and CD4 cell counts high—therefore minimizing the risk of immune suppression and AIDS-related health complications—but it can minimize the risks of certain non-AIDS-related illnesses that are more common in people living with HIV. These include cardiovascular disease, kidney disease, liver disease and certain cancers.

HIV treatment is now recommended for all people living with HIV in the United States.

When should treatment be started?
The U.S. Department of Health and Human Services (DHHS)—the federal agency responsible for setting health-related policies in the United States—regularly updates and publishes HIV treatment guidelines to help people living with HIV and their health care providers determine when antiretroviral therapy should be started. Here is what the guidelines, last updated in December 2019, recommend:

Here’s a look at the some benefits of starting treatment early, along with the possible risks of starting late:

What if I’m pregnant?
It is recommended that all pregnant women take HIV medications to protect their own health and also prevent mother-to-child transmission of HIV. Click here for detailed information about pregnancy and HIV.

How do I know my treatment is working?
When antiretroviral treatment is started, the level of HIV should start to drop dramatically. This is where viral load testing comes in. During the first two months of therapy, an HIV-positive person’s viral load should drop a minimum of 90 percent. In other words, someone who starts treatment with a viral load count of 100,000 should drop to 10,000 or less within two months. Within 4 to 6 months of starting therapy, the viral load should have dropped a lot more, hopefully below the level of the viral load test’s sensitivity (“undetectable”). Most tests used today can detect as few as 20.

As for your CD4 cell count, you will likely see an increase between 100 and 200 cells in the first 12 to 18 months, and can gradually climb from there as long as viral load remains undetectable. Some people who start HIV treatment for the first time have a poor CD4 response despite achieving and maintaining an undetectable viral load. Researchers refer to individuals in this situation as “discordant responders.” Most discordant responders waited to start treatment until their CD4 counts were well below 200. This is one of the reasons that the guidelines recommend starting ARVs immediately after diagnosis.

You and your doctor should continue monitoring your viral load on a regular basis to make sure that the HIV drugs are working properly and that the amount of virus in the blood remains below the level of detection or as low as possible.

You should also have your CD4 cell count checked regularly, at least once a year. Additional tests that your health care provider should monitor to ensure that you are not experiencing certain side effects include proteins associated with liver and kidney health, your cholesterol and your blood sugar.

And be sure to discuss with your doctor any problems you are having with your treatment regimen without delay. If you find yourself missing doses or experiencing side effects, you might be able to switch your current regimen for one that is easier to take or associated with fewer side effects. But it is crucial that you do this sooner rather than later. 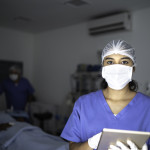