$7M HIV Initiative to Help Underserved People in the Southeast

These three grantees will launch programs thanks to the Merck Foundation’s “HIV Care Connect.”

The Merck Foundation launched a five-year $7 million initiative titled “HIV Care Connect” to improve the health of people living with HIV in vulnerable and underserved communities in the southeastern United States.

As the website for the initiative points out, more than half the people newly diagnosed with HIV live in the South and most are people of color. Because of factors such as economic instability, education, stigma and distrust of the medical system, certain communities have less access to care and see worse health outcomes. HIV Care Connect wants to change that.

The foundation named three organizations that will create programs aimed to reduce HIV disparities under the guidance of the University of Alabama at Birmingham. The three grantees are:

According to a press release from the Merck Foundation, which is funded entirely by biopharmaceutical company Merck, programming from the three grantees aims to:

“We need to accelerate solutions that address the growing disparities in patients’ access to HIV care and health outcomes and focus on communities that are most affected,” said Julie Louise Gerberding, MD, MPH, executive vice president and chief patient officer at Merck, in the press release. She continued, “Through ‘HIV Care Connect,’ the Merck Foundation is helping to catalyze collaboration among organizations across the southeastern United States and improve care coordination among people most affected by HIV.” 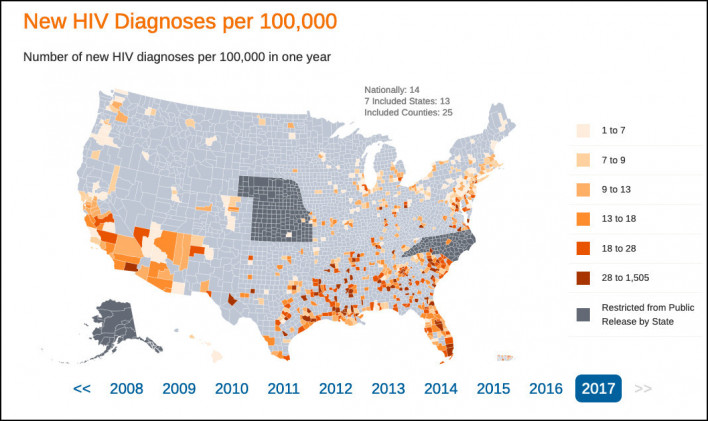 Sample graphic found on the End the HIV Epidemic DatabaseCourtesy of ehe.amfar.org

For a closer look at HIV rates in regions across the country, visit the interactive data and maps found on the Ending the HIV Epidemic Database, a new website launched by amfAR, The Foundation for AIDS Research. To read more about that, click here.