In total, about 37 million people are living with HIV, and nearly 53 percent of them are not virally suppressed.

Nearly 37 million people were living with HIV across the globe in 2017, according to estimates in a new report from the Joint United Nations Programme on HIV/AIDS (UNAIDS). About 25 percent, or 9.4 million people, are unaware of their positive status.

The 92-page report is titled Knowledge Is Power: Know Your Status, Know Your Viral Load. You can download it for free here.

The report also estimates that 52.6 percent of people with HIV globally are not virally suppressed, meaning that they do not have an undetectable viral load. 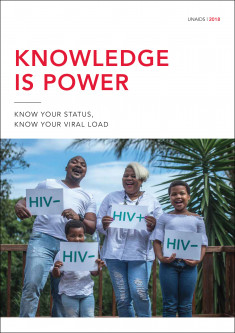 Cover of the UNAIDS 2018 reportCourtesy of UNAIDS

Knowing your status and taking daily meds are important because people living with HIV who maintain an undetectable viral load are healthier and live longer. What’s more, they cannot transmit HIV through sex. This fact is known as “undetectable = untransmittable,” or U=U.

Putting the UNAIDS numbers in a larger context shows some optimistic trends.

However, Sidibé also points out challenges that remain. “Access is mixed,” he writes. “In some parts of the world, getting a viral load test is easy—it is fully integrated into a person’s treatment regimen—but in other places it is close to impossible, with only one viral load machine for the entire country.”

“Some people are under the erroneous impression that the epidemic is done,” Wafaa El-Sadr, a professor at Columbia University and a global director of the public health organization ICAP, tells NPR in an article about the report. To illustrate that the epidemic is far from over, she cites two sobering statistics. “Two million new infections in the past year; still about a million deaths every year.”

In a related POZ article, Sidibé is stepping down early from his UNAIDS post amid criticism. For more on that, click here.