The child was treated with antiretrovirals for only 40 weeks starting at 9 weeks of age and has since maintained a fully suppressed virus.

A 9 ½-year-old South African child born with HIV is in an apparent state of extended viral remission after receiving antiretroviral (ARV) treatment for the virus for only 40 weeks starting at 9 weeks of age. The child has maintained an undetectable viral load for 8.5 years since researchers in a randomized trial took the then infant off treatment.

Findings about the child were presented at the 9th International AIDS Society Conference on HIV Science in Paris (IAS 2017).

The child belongs to a rarefied club of three documented individuals born with HIV who have gone into a state of viral remission following a period of ARV treatment begun soon after birth.

The group includes a French teenager born with HIV in 1996 who was treated with ARVs from the age of 3 months through some point between 5 ½ and 7 years of age. More than 11 years later, her body is still controlling her virus without ARVs.

The third child is the famous so-called Mississippi Baby. She received an atypically aggressive ARV treatment shortly after birth that was interrupted when her mother stopped bringing her into medical care when she was 18 months old. Ultimately, the Mississippi child saw her virus rebound at the age of 4 after 28 months off treatment, at which point she was put back on ARVs.

The researcher who first presented the Mississippi Baby case at the 2013 Conference on Retroviruses and Opportunistic Infections (CROI) in Atlanta used the term “functional cure” to describe the infant’s state. Feverish media reports about the case often left out the qualifier and simply reported that the child was cured. Qualified or not, both presumptions about the child’s state proved erroneous.

The researchers studying the South African child have been more cautious in their choice of words to describe the case, opting for the less sensational terms “viral remission” or “posttreatment control of HIV” to characterize this child’s state.

“Further study is needed to learn how to induce long-term HIV remission in infected babies,” Anthony S. Fauci, MD, director of the National Institute of Allergy and Infectious Diseases (NIAID), said in a press release. “However, this new case strengthens our hope that by treating HIV-infected children for a brief period beginning in infancy, we may be able to spare them the burden of life-long therapy and the health consequences of long-term immune activation typically associated with HIV disease.” 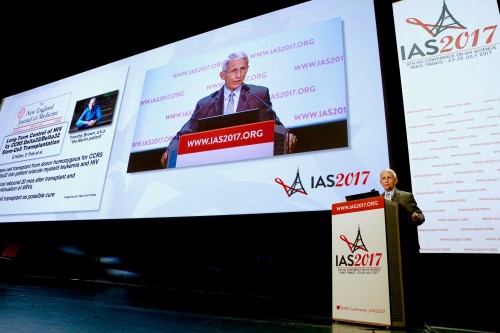 Anthony S. Fauci, MD, director of the National Institute of Allergy and Infectious Diseases (NIAID), giving an address at IAS 2017 about viral remission research. Here he discusses the Berlin Patient, Timothy Ray Brown, the only person ever cured of HIV.Benjamin Ryan

A group of French adults, known as the VISCONTI cohort, are also in such a state of posttreatment control, having passed four to seven years of ARV-free control of HIV after receiving extended treatment that began soon after infection.

The South African child was a participant in the NIAID-funded Children with HIV Early Antiretroviral Therapy (CHER) clinical trial, which ran from 2005 to 2011. The trial included infants who contracted HIV at birth from their mothers at birth who were randomized to receive ARV treatment on a deferred basis or to receive ARVs early, but only for 40 or 96 weeks. The children were then restarted on ARVs if necessary, based on CD4 count and other clinical criteria.

The child in question was randomized in 2008 to receive 40 weeks of HIV treatment, beginning at 8.7 weeks of age. (A total of 126 infants were randomized into the 40-week-treatment group.) This child’s HIV diagnosis was confirmed 32 days after birth with an HIV-DNA PCR test, which looks for the virus’s genetic material. On days 39 and 60 after birth, the infant’s viral load was very high: greater than 750,000 and 151,000, respectively.

While on ARVs, the child’s viral load declined to below 50 copies at week 24 and was below 20 copies after treatment was interrupted. Researchers continued to closely monitor the child’s immune health after discontinuing treatment.

The child has maintained good health as the researchers have conducted follow-up over the years. Standard practice in South Africa did not dictate ongoing monitoring of viral load of individuals with HIV not taking ARVs during the follow-up period in question. However, researchers went back and looked at stored blood samples taken from the child over time, which showed that the child has indeed maintained an undetectable viral load.

When the child was 9.5 years old, researchers conducted thorough laboratory and clinical analyses to assess the child’s immune health and to look for evidence of HIV. The child has no symptoms of HIV infection and has a robust CD4 count of 802 (above 500 is considered optimal).

The researchers were able to detect only a very small viral reservoir. Specifically, according to one way of detecting the size of the reservoir, there were 2.2 HIV copies per 106 peripheral blood mononuclear cells.

HIV’s genetic material was integrated into the child’s cells—this is known as proviral DNA—according to an ultrasensitive test. However, other highly sensitive tests could not detect any HIV capable of copying itself.

The child was infected with HIV subtype-C, which is common in sub-Saharan Africa.

The researchers also determined that the child lacks genetic characteristics that are linked with spontaneous control of HIV. This suggests that the 40 weeks of treatment may have been instrumental in leading to the state of extended viral remission.

“What is explaining this?” Anthony S. Fauci, MD, director of the National Institute of Allergy and Infectious Diseases (NIAID) of the child’s case, said at IAS 2017, of the factors that prompted this long-term remission. “The short answer is we don’t know.”

“We believe there may have been other factors in addition to early [ARV treatment] that contributed to HIV remission in this child,” Caroline Tiemessen, PhD, head of cell biology at the Centre of HIV and STIs of the National Institute of Communicable Diseases (NICD) in Johannesburg, said in a press release. Tiemessen’s lab is studying the child’s immune system. “By further studying the child, we may expand our understanding of how the immune system controls HIV replication.”

Such knowledge may help inform future research into planned treatment interruptions among those treated for HIV early in the course of infection.

The National Institutes of Health (NIH) is sponsoring an ongoing clinical trial known as IMPAACT P1115, which is giving ARVs to babies born with HIV within 48 hours of birth to see whether this may lead to additional cases of extended viral remission after treatment among the children when the treatment is ultimately stopped. Launched in 2014, this trial has enrolled almost 400 infants born to HIV-positive mothers, 42 of whom contracted the virus. These infants are in Argentina, Brazil, Haiti, Malawi, South Africa, Uganda, the United States, Zambia and Zimbabwe.

According to the trial’s design, the first child participants may become eligible to stop receiving ARVs in late 2017.