Michelle Anderson was crowned Ms. Plus America in July 2011, making the Duncanville, Texas, resident the first known HIV-positive woman to win a national pageant title. But, despite her winning looks, her life hasn’t been all scepters and sashes. 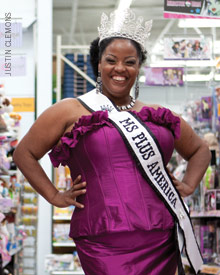 Before becoming full-figured royalty (the “Plus” in her title refers to a plus-size), Anderson led a hard-knock life. Her challenges ran the gamut: drug abuse, incarceration, struggles with single motherhood and the daily tribulations of living with HIV.

Now, Anderson is an HIV/AIDS advocate, a proud grandmother and a student at Eastfield Community College, where she’s studying to become a substance abuse counselor. Anderson will use her platform to address the stigma, shame and blame associated with HIV infection among women. Poise and grace aside, she is already leading the charge in this battle, simply by being her openly HIV-positive self.

What drives you to do what you do?
Overcoming expectations. My life has been hard and full of trauma. I was molested, and felt unwanted, shame, guilt, and I was insecure being plus-sized. These emotions led to drug abuse, promiscuity, sex work and other risky behaviors. It has been a long road to find the Michelle of today.

Also, I do not want to see another woman fall victim to HIV. This disease has caused so much devastation, and women’s issues are always thrown under the bus. Women are dying from this disease at an alarming rate. It is my hope that other African-American HIV-positive women step up to the plate and become involved in making better decisions.
What is the best advice you ever received?
[At the moment] I was about to drop out of the competition I was told, “You can’t give up because HIV-positive women are depending on you. Every time you walk across the stage, you represent thousands of women who are afraid to say they are positive.” I used a whole roll of toilet paper to wipe my eyes that night.
What person in the HIV/AIDS community do you most admire?
I admire Miss Marsha Jones of the Afiya Center HIV Prevention and Sexual Reproductive Justice in Dallas. She has taken me under her wing and taught me everything she knows about HIV as it relates to science, politics, reproductive rights and advocacy so that one day she can turn the reins over to me when she retires. She saw a leader in me I never knew I was and nurtured it.  I love her for that!

What keeps you up at night?
Praying my grandchildren will get a chance to grow up in a world where HIV doesn’t exist.