David Munk from Sundance Channel’s Girls Who Like Boys Who Like Boys joins Mondo Guerra and Jack Mackenroth from Project Runway, Pedro Zamora from The Real World and Ongina from RuPaul’s Drag Race in the pantheon of HIV-positive reality TV stars.

He shares the spotlight on the show, which explores the relationship between women and gay men, with his best friend Elisa. POZ catches up with the effervescent New Yorker.

Why did you disclose your status on TV? 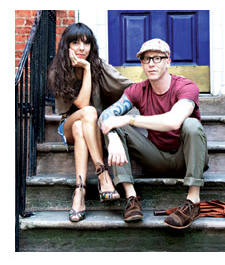 I don’t have shame about being positive, so it didn’t make sense for me to exclude this fact since it’s a big part of my story.

I think it is important for people who are positive to talk about it because that’s how stigma is changed. It never occurred to me to be circumspect about something on TV I am open about in my life.
How has your friendship with Elisa helped you cope with your HIV status?
Having the support of Elisa, particularly, but my family as well, was really key because when I was told I was positive my perception of [HIV] was that it was a death sentence. We’ve just always been there for each other.

How has your HIV status affected you, personally and professionally?
The aftermath of my diagnosis and subsequent drug use robbed me of a lot of years. I feel very young and that my career is just beginning.
Are you planning to get involved in advocacy?
HIV advocacy is something I feel strongly about. I think I can be helpful to younger people who are struggling with HIV and how it affects their self-esteem.