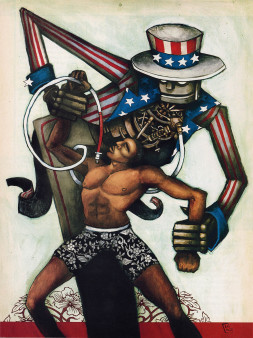 When the Centers for Disease Control announced its controversial new initiative “Advancing HIV Prevention” in an April 2003 issue of the Morbidity and Mortality Weekly Report—the same bad-news newsletter that announced the epidemic’s arrival in 1981—not a single AIDS advocate had heard a whisper of what was in the offing. Not Gay Men’s Health Crisis, not the National Association of People with AIDS, not the National Minority AIDS Council—no one. Yet Tom Coburn, the Presidential AIDS Council chair famous for attacking homosexuality and promoting partner notification, issued a press release praising the CDC plan as “a major step forward” the day before the newsletter came out. In the information-control-obsessed Bush administration, the timing sent a clear signal about who’s now in the AIDS inner circle.

The CDC initiative, which critics say has only a threadbare basis in prevention research, was the latest in a string of Republican AIDS bungles, from Bush’s plans to close the White House AIDS office (scuttled after protest) to multiple audits of the San Francisco prevention group Stop AIDS Project to censorship of terms like sex worker and men who have sex with men in National Institutes of Health grant applications. But compared to the CDC’s sudden “prevention for positives” campaign, as its new initiative is known, these dust-ups seem mere missteps.

By focusing almost exclusively on HIVers, the CDC’s new measure could upend prevention models 20 years in the making, slash funds for some 200 HIV prevention programs and, perhaps most frighteningly, turn HIV testing into a tool for stigmatizing positives (see “Prevention for Positives”). That the CDC did an end-run around the AIDS community only added to the outrage. “When I was at CDC,” says a former AIDS official from the Bush Senior and Clinton years, “key changes in policies were usually accompanied by public consultations, so that concerns could be heard and policies strengthened.”

For the first 12 years of the epidemic, Republican administrations mostly turned a blind eye to the disease. But Dubya’s crew has dreamed up cunning ways to claim the AIDS crisis as its own. While its multibillion-dollar global-AIDS juggernaut sets aside massive funding for unproven abstinence-only prevention and “faith-based” programs, the CDC’s “major step forward” threatens to starve programs that serve gay men and places responsibility for prevention on HIVers. Welcome to Republican AIDS, born-again.

Thanks to some activist heat last July—hundreds protested a speech by Health and Human Services (HHS) deputy secretary Claude Allen—it seemed that the Bush team finally realized it had gone too far. The CDC hurriedly called town meetings with HIVers (the audience for the new “prevention for positives” gospel) and people of color (the new at-risk population). POZ has learned that much less publicly, HHS secretary Tommy Thompson also hired openly gay former Wisconsin congressman Steve Gunderson to help him reassess domestic AIDS strategy—and do a little burned-bridge repair.

Starting in August, Gunderson brought together small groups of high-level HHS staffers and leading AIDS advocates. HHS spokesman Tony Jewell called the meetings “outreach to better explain what it is we’re doing,” adding that “the secretary is always interested in hearing how things can be done better.” Invitees describe the meetings in optimistic terms. One AIDS executive, who asked not to be named for fear of jeopardizing his newfound access, says he openly raised a range of concerns from audits to grant censorship to the surprising level of influence enjoyed by the antigay “family values” lobby. “All of us have the sense that they were really listening,” he says. Several participants say the sessions spotlighted the secretary’s role as an ally within an agency divided between conservative ideologues, led by abstinence true-believer Allen, and those defending science-driven public health, led by Thompson.

The meetings culminated in a high-powered, closed-door early-September meeting where leaders of a dozen major AIDS organizations aired their concerns about the initiative with the government’s AIDS heavies, including Secretary Thompson; Anthony Fauci, the National Insitutes of Health’s (NIH) longtime HIV-research head; and CDC director Julie Gerberding. The million-dollar question says a lobbyist from one invited group: “Does this represent a shift in policy, or is this just about placating the opposition?” CDC spokeswoman Kitty Bina equivocates, saying, “The basic core elements of the initiative are not going to change, though the way we implement it is flexible.” One significant shift to come out of the consultations, Bina says, is that “there will be some [prevention] funding available for those who are at-risk but are not HIV positive.” Perhaps the lessons learned from two decades of community-based HIV prevention will not be entirely scuttled.

Or perhaps they will. In October, soon after the previous month’s watershed summit, several Republican congressmen on the House Energy and Commerce Committee, led by Pennsylvania’s Joe Pitts (one of the pols behind the Stop AIDS audits), demanded that NIH director Elias Zerhouni defend 10 research projects the legislators deemed frivolous, all but two related to sexuality. When NIH staff called to get the names of the projects, an unnamed Republican committee staffer sent them a list of 289 grants, overwhelmingly in the area of HIV prevention. Soon a number of top researchers in HIV prevention received warning calls from NIH staff. Only after California Democratic Rep. Henry Waxman, a staunch AIDS ally, got wind of the calls and blew the whistle did the right-wing Traditional Values Coalition come forward to claim authorship of the list. Director Andrea Lafferty told the Associated Press, “We know for a fact that millions and millions of dollars have been flushed down the toilet over years on this HIV/AIDS scam and sham.”

That a “hit list” created by a fringe organization like the TVC, whose founder once called for AIDS leper colonies, triggered such an aggressive response at NIH has unnerved some observers of the ongoing funding saga. “It’s no surprise that the Traditional Values Coalition would generate a list like this,” says Ken Haller, MD, president of the Gay and Lesbian Medical Association, which first exposed the grant-language censorship last spring. “But the fact that it received credence in government speaks volumes about the lack of respect this administration has for science when [it] conflicts with ideology.”

Pitts’ spokesperson Derek Karchner insists that his boss played no role in forwarding the TVC list and has yet to even see it. And Secretary Thompson fired off a testy response to Waxman denying any HHS collusion. “HHS and its leadership team create and support an environment of solid scientific research,” his letter read. What remains to be seen is whether Thompson will express these opinions as emphatically to his own deputy secretary, to the CDC and to ultraconservative members of Congress increasingly bent on tearing down HIV prevention.

Meanwhile, the AIDS community waits. Whether wholesale defunding is in the works won’t be known until next year, when new grants are announced. Prevention providers and researchers, such as Tooru Nemoto, PhD, of the Center for AIDS Prevention Studies at UCSF, proceed under a cloud of anxiety. Nemoto’s work has been publicly attacked by two Republican senators, and he’s been audited by two separate federal agencies (he received one onsite NIH visit). He even turned up on the TVC hit list. “The site visit was particularly stressful,” he says. “And then to be targeted by Congress—I feel insecure. Many of my colleagues are scared.”