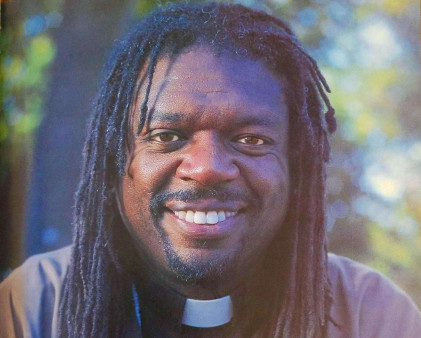 Whether his sermon is disco, liberation theology or herbal remedies, Rev. Cheeks’ message is all about healing.

The gospel according to Matthew, Rainey Cheeks’ 10-year-old godson, is that in any given 10-minute period at least 11 people will come up and say “Hi” to his Uncle Rainey. This observation is not stated with absolute approval -- possibly because these spontaneous meet-and-greets happen wherever Cheeks and Matthew go in Washington, DC. Even when they are doing their own thing, like cycling. And on a bright autumn morning, as Cheeks, one of his ministers, Patrick Mays, and Matthew sit down for brunch, Matthew’s calculations are just about right: There’s a procession of good-looking, friendly African-American men who either wave as they pass or stop, turn and then come into the restaurant to share a quick hug and hello.

Reasons for this quasi-celeb spectacle are many. Cheeks, 46, is a native Washingtonian (as were his mother, Omie, and grandmother), and he has an ingrained knowledge of many of the locals. The restaurant, near the festive open-air Eastern Market, is one of his regular Saturday destinations, and therefore the commotion is less happenstance than warm weekly ritual. But perhaps the most salient factor binding Cheeks to his environs is that he is the founder of two of the city’s most enduring black gay organizations.

On July 4, 1993, a day he likes to refer to as Spiritual Independence Day, Cheeks began the Inner Light Unity Fellowship Church and added the moniker Reverend. Part of a national movement grounded in liberation theology, Unity Fellowship churches are the brainchild of Carl Bean, former head of the Minority AIDS Project in Los Angeles. One of nine churches up and running, Cheeks’ congregation has on any Sunday afternoon as many as 200 worshippers, many of them gay, lesbian, bisexual and transgendered people, plus their friends and family. Eight years before starting the church, Cheeks began DC’s first AIDS service organization for gay black men, Us Helping Us: People Into Living.

Cheeks has also ventured beyond the spiritual, into the hard-edged world of treatment. He has served on four different clinical-trial boards, and has carefully studied the fine print of trials themselves, seeking to translate their technical complexities into language that his community members -- many of whom are trial participants -- are more comfortable with. He’s also a self-appointed watchdog over government spending, and will have his hands full trying to make sure 1999’s $130 million federal windfall is targeted to the minority organizations that need it the most.

In late October, nearly 500 people attended a celebration for Us Helping Us’ 10th year as an official not-for-profit. Ron Simmons, its current executive director, recalls that in 1991, when he first met Cheeks, “the group was still meeting in Rainey’s living room.” It now occupies a two-bedroom house in Southeast Washington, with six full-time staff, 15 part-timers and an operating budget of $500,000. While it continues to offer programs that come out of Cheeks’ longtime commitment to holistic approaches to fighting HIV -- such as herbal remedies and meditation classes -- the organization also offers support groups that focus on risk reduction and serve men taking antiretrovirals.

The origins of Us Helping Us reach beyond the beginning of the epidemic. In 1975, Cheeks was invited by the proprietor of a popular DC nightspot to work on a new dance club, the Clubhouse. “I was doing construction at the time. We gutted this place, laid the floor, painted it -- we did everything ourselves,” he recalls.

By 1983, the club, like so many other gay male spaces, had become a virtual epidemiological tracking center. “We started having deaths,” says Cheeks, who managed the space for all of the 15 years it was open. “We were trying to figure out what was going on, and nobody had a grip on it. There was more focus on the white gay community, but we saw how it was hitting our membership.” Cheeks’ lover of eight years, Carl Samuels, died in 1985.

“I knew I was positive,” Cheeks says. “I didn’t even take the test.” What he did do was begin providing services to ailing Clubhouse members, such as limo rides to and from the joint to see the likes of Nona Hendrix, the Weather Girls and Patti LaBelle. Money raised during special events went to AIDS organizations and for PWAs’ rent and food.

The Clubhouse closed in 1990, the same year that Cheeks was hospitalized for the first time. Cheeks, who often contemplates the meaning of illness, will tell you that at that time he was burning his candle at both ends. He will tell you that perhaps he was paying the price for pushing so hard: running a martial-arts school, visiting the sick, working to make Us Helping Us vital to the community. When he entered the hospital, he was experiencing debilitating arthritis.

The recounting of that pivotal second consultation is what follows. At this point you must trust and accept one thing: There’s no way the Rev. Cheeks has not told this story a hundred times; there is no way he has not testified and witnessed, challenged and cajoled, demanded and charmed his listeners -- be they congregants, activists, other ministers, even doctors -- to imagine that night’s events. There’s no way he has not used this story as a tool, a scalpel to examine the marrow of what healing is. And it is his emphasis on healing that defines exactly what sort of leader he has been in the AIDS crisis. Herewith, a brief sermon:

“On a January night a bit before midnight,” Cheeks begins, “I tell the attending nurse to bring me all the evening’s medication. I say, ’When you close the door, don’t come back in here unless I say it’s OK. This night is going to be a conversation between me and my God.’” At the time, Cheeks was taking two Percocets and a sleeping pill just to get five hours of rest. “In the beginning it was a pretty prayer,” Cheeks says in a rather rueful aside: “Oh heavenly father, I humble myself. You are the creator and sustainer of life. I’m your child. Oh, hear my humble cry. But the pain said, ’Baby I’m not going nowhere’” -- here Cheeks pauses, aware that any sermon is only as good as its rhythmic silences -- “If you are God, then where are you? Show up! Show up! And the wind was blowing, and I was like ’No, no, no,’ I don’t need to see any wind blowing. I know you can make the wind blow. I can’t translate nothing right now. Show up! Show up! You need to talk to me! I am screaming” -- here Cheeks is screaming -- “The pain is screaming. Talk to me! Talk to me! You’re supposed to be God, if you’re my God show up. Show your face to me” -- here Cheeks smiles knowingly -- "I’m giving you the sweet version. The nurse came in the room and said, ’Can I help you?’ I said, ’Is your name God?’ She said no, and I said, ’Get the hell out of here -- this is a private conversation.’ I am now sitting up in my bed, screaming, ’Show up! Show up!’"

Five months later, Cheeks approached the doctor who told him he would never walk again and said, "I want to let you know you were 50 percent right: You were wrong that I would never walk again. But you were right that I’ll be dead by Christmas. You just never said which Christmas.“ This is the kind of moral punchline meant to transform doubt into optimism. ”And then,“ Cheeks adds, ”I gave him back every prescription he’d ever given me."

Throughout his hospital stays -- he has had two more since then, in ’93 and ’96 -- Cheeks has sought a mind-body approach to the virus: He had an acupuncturist and an herbalist visit him, and he used visualization techniques. Us Helping Us’ Simmons says, “Cheeks has really been a symbol of what is possible holistically.” So much a symbol that Cheeks has spoken at the past three international AIDS conferences about the efficacy of holistic medicine.

“People always ask me if I use holistic therapies or Western medicine,” he says. “And you know, it’s not an either/or. Do what you have to do to survive. I tell people to try everything first before you do the drugs. But it’s still not an easy journey. Insurance don’t pay for herbs. It don’t pay for acupuncture or massage therapy.”

Though Cheeks insists he has never been inflexible about survival strategies, he was not surprised to find some holistic practitioners disturbed by his current protease combo. “And I said, ’Listen. You look at me now and I’m 200 pounds, I’m strong.’ I went down to 140 pounds, T-cells at 40 and a viral load that was outrageous. I was in crisis mode and, yes, I started protease.” Not that this man of faith doesn’t have his doubts. “I’m at a place now where I can rethink this,” he says. “I just did the AIDS Ride from Raleigh, North Carolina, to DC. Yes, I’m strong.”

In a typical week in October, Cheeks proved again what level of energy he has: He evoked the ancestors at a Sunday afternoon blessing of two ministers and four deacons; he attended a celebration for Us Helping Us; he took Matthew to buy a newt; and he held a memorial service for a young environmental health and AIDS activist he never met, but who left an explicit request that Cheeks conduct her service.

“I’m not looking for the magic bullet, the cure.” Cheeks says of his 15-year fight. “I’m still doing herbs, I’m still doing body-energy work, I’m still a vegetarian.” He pauses. “I’ve been in the hospital three times, and each time it’s a reminder to me,” he says finally. “Do what you need to do.”