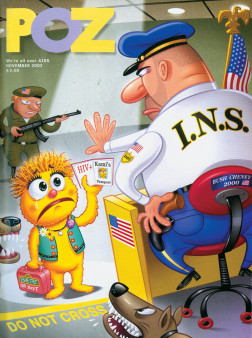 Special Report: Takin’ It to the Street

Listen up, Dubya. We’re not all Christian, all clean and all “saving it” for our wedding night. But we all deserve the gospel truth from our government about how to save ourselves and others from HIV. The faith-based “prevention” you and your abstinence-only ayatollahs are trying to force down our throats is worse than a political ploy. It’s a weapon of mass destruction. But now we’re fighting back the way ACT UP fought your dad. You think Oscar the Grouch can raise a stink? You ain’t seen nothing yet.

A few words about our cover model. First, she is very bright for a 5-year-old, but they say Muppets mature quickly. She is a little shy, because she has a secret. But she’ll open up if you ask her to tell you a story, especially about nature, which she likes a lot.

Her name is Kami. It means acceptance in Tswana. She wandered onto South African Sesame Street last September, a little afraid the regulars like Neno and big, blue Zikwe wouldn’t want to play with her. You see, Kami’s secret is that she has HIV, just like one out of every nine of her fellow South Africans. She’s also one of 400,000 kids there who’ve lost both parents to AIDS. But instead of shunning her or worse, the Takalani Sesame gang asked her to stay. That means that millions of kids will grow up with a little more understanding and a little less fear of a disease that thrives on silence and stigma. Every day, Kami can teach them a lot -- about the truth. Acceptance. And love.

It can’t happen here. No sooner had Kami come out than six GOP congressmen reached for their guns, warning PBS that "what may be fitting for viewers of Sesame Street in South Africa may not be appropriate for children in the United States“ -- and indirectly threatening the station’s funding. PBS prez Pat Mitchell rushed to assure them that no such Muppet was en route -- until, perhaps, HIV ”became a more serious problem" in the U.S.

Well, for Americans who have the virus, HIV already is just that. And anyway, how many tiny viewers actually knew a hearing-impaired person when the Sesame Street family adopted Librarian Linda? Or had experienced the death of a loved one when it explained Mr. Hooper’s absence to Big Bird? Seventy-five Emmys prove it: Sesame has always had a gift for making the different normal by explaining to 5-year-olds no more than what was “appropriate” on all kinds of sticky stuff.

So what’s fitting for children in the United States to know about HIV? That it’s bad, but that people who have it aren’t. That except for having HIV, we’re just like everybody else. And as Sesame Workshop’s Gary Knell puts it, that “you can hug and love someone who may have the HIV virus” -- and you’ll be OK. That’s it.

But even that’s too much truth for those congressmen -- not to mention some folks in DC who don’t seem to want people of any age to know the truth about AIDS. Like this one: Condoms, if you use them right, will protect you from HIV. Or this: “Saving yourself” won’t keep you safe if you don’t know your new husband used to shoot crack or sleep with men.

But shhh! That’s big-kid stuff. For millions of American kids born into a world with HIV, all the truth they need right now could start with a furry yellow orphan named Kami. She has a story for us. Let her in.