Achieving a happy relationship can be easier than you think—despite the obstacles presented by HIV.

If the news that having a partner can boost your health makes you wonder, “How will I ever find someone to love me with my HIV?” stop stressing. Though isolation and stigma—not to mention the challenges of facing ongoing health concerns and navigating how and when to disclose your status—can be obstacles, they are not closed doors. Many HIV-positive people, both gay and straight, have overcome them. Just ask Bonetta Graves.

Graves remembers the first time she met her dream man, William Spratley, in their hometown of Hopewell, Virginia. “I loved his maturity and experience,” says Graves, 42, now a medical case manager in Manning, South Carolina. “I’ve always had an old soul.”

But at that time, 1987, Graves was anything but old: She had just turned 18—and Spratley was 38. “My parents disapproved,” she says. “But I was headstrong.” Moreover, both she and Spratley were doing crack—in fact, they first met when Spratley’s nephew brought Graves by Spratley’s place on a drug run. “I was wild in my youth,” admits Graves, who kicked drugs more than a decade ago. 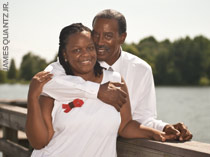 Their romance was short-lived: In 1989, Spratley went to prison on a drug-related charge of violence. After visiting him there a few times, Graves told him, “I can’t wait around for you.” A year later, Graves, working in the federal Job Corps in Maryland, learned she had HIV. “I cried for three days,” she says. She told Spratley, but he waited years to be tested, fearing a positive diagnosis would stigmatize him in prison. Eventually he got tested—and it was negative. Graves had gotten HIV from someone else.

The following years were not kind to Graves. She became seriously ill with pneumonia in 1991, recovered and continued doing drugs on and off. At a rehab program, she met an HIV-negative man. They married and had two (HIV-negative) girls, now 14 and 11. The couple also kept doing drugs—and then he started abusing her. “There were stitches, broken ribs,” she recalls. But because he was the breadwinner and accepted her despite her HIV, she stayed with him. “I felt like I had to because he was ‘taking care’ of me.” Her self-esteem was low—because of her drug habit, she says, not just HIV. “I hadn’t done anything with my life, so I was timid when it came to relationships. My HIV [didn’t help].”

Graves kicked drugs for good after her mother died in 1999. “I had two kids, and I was tired of all the drama. I was ready to move on, but he would never leave,” Graves says. Finally, in 2005 the couple decided to divorce.

A new chapter loomed. “I was elated but scared, because I had to raise two girls on my own,” she says. “But I vowed I wouldn’t get with a new man just because he had money and looked good.” Then she heard that Spratley was out of prison, where he’d been drug-free since 1994 and had become a legal advocate to other prisoners. Graves ventured introducing her girls to him. “He hugged them and opened his heart to them,” she says, “and honey, after that, it was on.”

Just like that? Graves said that the fast reunion felt right, like they were picking up naturally where they’d left off years before. “It was like the missing piece of the puzzle,” she says. “Plus, he was gentle. There was no arguing.”

Six years later and drug-free, Graves and Spratley seem to have found the clarity of mind to do things right this time around. They’ll marry next year. Saturdays, Spratley takes the girls to the library, and the whole family loves to thrift shop and fly kites together, a special hobby of Spratley’s.

Graves has advice for other HIV-positive folks looking for love. “Don’t ignore red flags,” she says—such as early indications of violence. “Hang in there looking for [the right] love, because you never know when the tables will turn.” Graves says full, honest communication is what’s allowing her and Spratley to succeed this time. Spratley agrees: “She doesn’t let me run from things,” he laughs. “There’s no woman more perfect for me.”

HOW TO: MEET YOUR MATE
Advice From the Experts
Shantrell Jackson, cybercenter associate at Atlanta’s SisterLove,  HIV-positive coordinator of its Dating and Disclosure workshop:

“Don’t settle because of HIV. Date someone you see yourself being with.

“I don’t disclose my HIV right away. That’s too serious, too soon. When I do, I do it in a public place where I feel safe and secure.” If they reject you? “You don’t want to be with someone who’s not comfortable with all of you. But don’t necessarily expect them to be OK with it right off the bat.

“To make it work long-term, you need honest communication, even if that means couples counseling.”

“Take the time you need to disclose—you’ll know when you’re ready. Experiment with both telling up front and waiting a little. Just [don’t] do anything unethical or unsafe [like having unprotected risky sex without disclosing].

“Give people time to adjust to your HIV. Some people will say, ‘It’s fine,’ and you’ll never hear from them again. But others take a little time, then, a few months later, it’s no biggie.”
Positive Women Share Secrets to Their Success
Tonya Rasberry, peer counselor, Auburn, Washington, has been with her HIV-negative partner for a few months:

“You can learn to achieve good communication by really listening, putting yourself in the other person’s shoes. I am learning to do that in my new relationship, and I’ve never been happier.”

Shana Cozad, HIV prevention educator, Tulsa, Oklahoma, has been with her HIV-negative partner “since the dawn of time”:

“Be super-duper open and honest. A sense of humor goes a long way, too.

“Sex can be intimidating. Don’t expect it to be all fireworks and trumpets [at first]. Just be fine that they aren’t totally panicking.

“Someone who scorns or shames you about having HIV is a huge no-no. I don’t care how many margaritas they’d had or if they say they’re sorry.”

Andrea Harrington, HIV prevention specialist, Philadelphia, has been married to her HIV-positive partner for six years:

“Never be ashamed because you’re positive. I thought HIV made me damaged goods, not worthy of love. But being HIV-positive did not mean I had to settle for substandard. I [waited] until my prince came, willing and accepting of all of me. My husband and I found each other while basking in the light of a newly found independence called self-worth.

“To make it work, you must be open with each other. Secrets are for the Colonel’s chicken recipe.”

Find a Friend or Date Online
The largest online HIV match-up service—for love or friendship—is POZ Personals, with more than 125,000 members and a new, easy-to-use design. Sign up for a free or premium account at personals.poz.com.

Some tips for using POZ Personals: