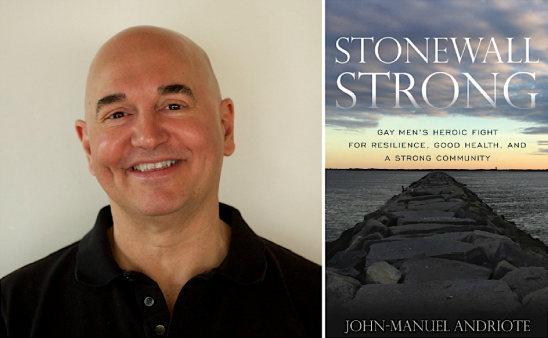 The following is an excerpt from Stonewall Strong: Gay Men’s Heroic Fight for Resilience, Good Health, and a Strong Community, by journalist and author John-Manuel Andriote. For related insights from him about this book, read our interview titled “Are You a Victor or a Victim? This Quality Can Make the Difference.”

Larry Kramer tried to kill himself his freshman year at Yale. The most famous hero of gay America’s heroic response to the AIDS epidemic was lonely and felt as though he was the only gay student on campus in 1953. Fortunately for gay men and the world, his suicide attempt failed. A quarter-century later, Kramer would likewise survive character assassination by other gay men after his 1978 novel Faggots blew the closet door off the world of drugs, promiscuity, and multiple sexually transmitted infections that had come to define “gay liberation” for many gay men in the great coming-out party of the 1970s.

As a pariah within a community of pariahs, Kramer’s outsider status gave him the perspective he would need to become the loudest and most visible champion of gay men’s fight to awaken the United States to the realities of AIDS. Unfortunately for gay men and for America, Kramer also would live into the name he often used for himself—Cassandra, the mythic daughter of the king of Troy, gifted with foresight but fated never to be believed.

“Unless we fight for our lives, we shall die,” he wrote in the New York Native in March 1983. Before Kramer’s article “1,112 and Counting,” gay people were doing what they could to care for the sick and mourn their dead with quiet dignity. After the article appeared in gay papers across the country, they grew increasingly unwilling to be quiet about the deaths of gay men and the preternatural silence about the epidemic from elected officials.

As the 1980s wore on and tens of thousands of gay men died with still no effective treatment for AIDS, Larry Kramer’s nerves were shot. In a March 10, 1987, speech he gave at the New York Lesbian and Gay Community Services Center, today known as the LGBT Center of New York, Kramer laid into the gay community as only Larry Kramer could. “If my speech tonight doesn’t scare the shit out of you, we’re in real trouble,” he told the group. By then, thirty-two thousand AIDS cases had been reported across the country—nearly a third of them in New York. President Reagan still hadn’t spoken about AIDS to frightened Americans. “If what you’re hearing doesn’t rouse you to anger, fury, rage, and action, gay men will have no future here on earth,” said Kramer. “How long does it take before you get angry and fight back?” The crux of the speech was Kramer’s simple question: “Do we want to start a new organization devoted solely to political action?”

The answer was a resounding “Yes!” Two days later, about three hundred people again showed up at the center where they formed ACT UP, the AIDS Coalition to Unleash Power. The group’s first demonstration—a protest on Wall Street against the exorbitant price of just-approved AZT, the most expensive drug ever to that point—introduced what became the group’s distinctive brand of street theater. ACT UP took the camp humor and theatricality of the Gay Liberation Front “zaps” to a whole new level.

ACT UP/New York’s energy and early successes sparked the formation of ACT UP chapters in cities across the United States and in several other countries as well. In San Francisco, for example, the late activist Hank Wilson told me in our 1995 interview for my book Victory Deferred, “We formed ACT UP here because we liked the name, we got off on the energy of the people in New York, and we loved their graphics.” As Larry Kramer told me, “The fact that everybody responded to ACT UP, I think was more just a question of time, and moment, and frustration. It was the right time for it to happen.”

ACT UP’s brightest moment of media coverage was its October 11, 1988, protest against the Food and Drug Administration. A year to the day after the second March on Washington for Lesbian and Gay Rights, and just after the second showing of the AIDS Memorial Quilt in Washington, D.C., “Seize Control of the FDA” became the most widely publicized of ACT UP’s early demonstrations. It was organized by ACT NOW, a network of ACT UP chapters throughout the country that had formed during the 1987 march, primarily to protest the FDA’s hidebound procedures for the testing and approval of new drugs.

Activists in T-shirts that said “We Die, They Do Nothing!” plastered the front of the Parklawn Building, the suburban Washington FDA headquarters, with ACT UP graphics and banners that said things like “Time isn’t the only thing the FDA is killing” and “The Government has blood on its hands. One AIDS death every half hour.” Others provided a nonstop theatrical spectacle for television cameras that ate it up. One group did “die-ins,” lying on the ground in front of cardboard tombstones with “epitaphs” such as “R.I.P. Murdered by the FDA.” Another group wrapped themselves in red tape. The ten-hour demonstration more or less shut down the FDA and resulted in 176 arrests. On October 24, nearly two weeks after the demonstration, FDA Commissioner Frank Young called for researchers to help speed the process for developing and approving AIDS drugs. For the first time in history a group of “patients” and their advocates had succeeded in forcing the FDA to budge.

AIDS gave gay men new words to use in defining “gay” that better suit a people who were tested by the fire of terrible illness, death, and stigma—and survived. Four words that come to mind are: heroic, brave, courageous, and proud. Larry Kramer made it clear in his landmark 1985 play The Normal Heart that the AIDS epidemic gave gay men a new, powerful identity to claim for ourselves. Kramer’s alter-ego Ned Weeks says, simply, “That’s how I want to be defined: as one of the men who fought the war.”

Kramer put it a little differently in our 1995 interview for Victory Deferred. We talked in the living room of his Fifth Avenue apartment, the setting for some of gay America’s most historic moments, including the world’s first AIDS fundraiser in 1981 and, in 1982, the formation of Gay Men’s Health Crisis (GMHC), the world’s first AIDS service organization. Reflecting in particular on ACT UP, Kramer said, “Singlehandedly, we changed the image of gay people from limp-wristed fairies to guerrilla warriors.”

On a sweltering late July afternoon in 2015, the air conditioner in his history-filled living room blasting at full tilt, I reminded Kramer of the quotation I had borrowed from Faggots as the epigraph for the opening chapter of Victory Deferred. In it the Krameresque protagonist Fred Lemmish marks his fortieth birthday saying, “It’s the beginning of the summer of our lives.” What, I asked Lemmish’s creator, would he say if a forty-year-old Fred Lemmish walked in and a now eighty-year-old Larry Kramer met him. “What would you tell a younger version of yourself?” I asked. “I tried to kill myself my freshman year at Yale,” said Kramer. “The younger Fred Lemmish almost wasn’t around to be anything but the younger Fred Lemmish. I don’t think so much about that. Somewhere along the line I was able to work out that I love being gay, that it was the most important thing in my life.”

No. I do not feel stronger and more resilient.

I do not have HIV.