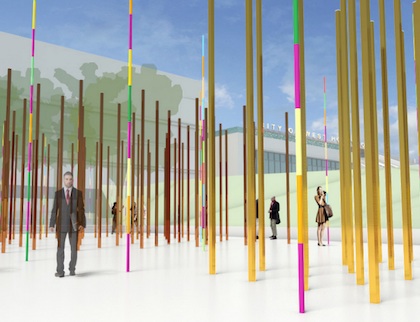 Two illustrations of the National AIDS Monument to be built in West Hollywood Park.

Cedars-Sinai Medical Center is donating an initial $250,000 to the Foundation for a National AIDS Monument to be built in West Hollywood, reports NewNowNext. What’s more, the Los Angeles hospital will match additional donations up to $250,000.

The foundation is still in the fundraising stage for the monument; with Cedars-Sinai’s donation, it has raised $1.2 million of the required $4.5 million.

The National AIDS Monument will be located in West Hollywood Park, which is undergoing an $86 million renovation.

Speaking at a ceremony to announce the donation, Cedars-Sinai CEO Thomas M. Priselac told the crowd: “Cedars-Sinai is proud to support and participate in the community effort to honor those who have died, as well as commemorate those whose activism, compassion and skills had such a crucial role in fighting HIV/AIDS and discrimination.”

Designed by artist Daniel Tobin, the monument will entail both a physical structure and an interactive experience.

Last month, actor Zachary Quinto, best known as Spock in the rebooted Star Trek, joined the board of the AIDS Monument. For more about that, along with his controversial statements about PrEP and young gay men, click here.