EFA and ARCW merger announcement. Click to watch the video. Courtesy of YouTube/ARCW

Only half the people with HIV in St. Louis are regularly engaged in care. This merger aims to change that.

AIDS Resource Center of Wisconsin (ARCW) merged with Saint Louis Effort for AIDS (EFA). The merger was effective September 1 and marks ARCW’s 12th location in three states (Wisconsin, Colorado and, now, Missouri), according to an ARCW press release. What’s more, a $1.7 million grant from the Missouri Foundation for Health will go toward helping the merger go smoothly.

As part of the merger, the St. Louis organization, which will operate under the name Effort for AIDS, will expand its programs and services. Notably, the merger will bring an HIV Medical Home to EFA, which will offer primary and HIV care as well as an on-site pharmacy.

The merger arrives at a good time because EFA has seen an increase in the demand for its services. In St. Louis, 6,145 people are living with HIV, and only half of them are engaged in care regularly, according to statistics from the Missouri health department quoted in the press release.

ARCW and EFA created a video announcement of the merger. You can watch that video above. In a related video, below, they discuss how the merger will affect EFA clients.

“EFA has a long-standing history in St. Louis of providing strong HIV prevention programs and services for people living with HIV,” said Michael J. Gifford, president and CEO of the AIDS Resource Center, in the press release. “We are excited to join forces with them to expand services to the people of St. Louis. In January 2019 we will offer primary and HIV medical care, a mental health program, pharmacy and critical social services that will work hand-in-hand with people living with HIV in and around St. Louis.”

“This merger will allow us to offer a new model of care to people living with HIV in St. Louis while also helping us better prevent new HIV infections, reduce AIDS-related deaths, stigma and other barriers to testing, care and treatment,” said Tawnya Brown, the new vice president of operations for the ARCW. “Additionally, through our partnership with Washington University and other organizations, we will make sure more people with HIV in St. Louis have access to all the HIV care and treatment they need to achieve viral suppression and optimal health.”

You can learn more about EFA on stlefa.org and more about ARCW on arcw.org. 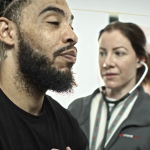