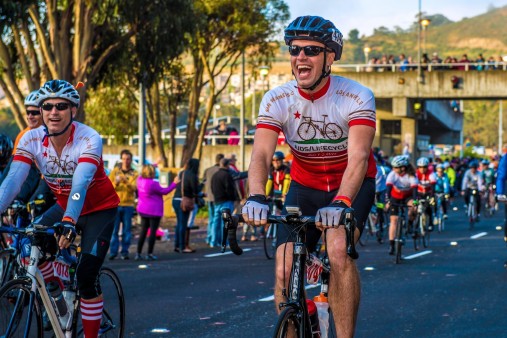 This year 2,800 cyclists made the 545-mile, seven-day ride. Promo image courtesy of AIDS/LifeCycle

Cyclists completed the seven-day trek in support of these HIV services in California.

Nearly 2,800 cyclists mounted their bikes and strapped on their helmets in the fight against HIV. The AIDS/LifeCycle participants began a seven-day trek from San Francisco to Los Angeles, completing 545 miles and raising more than $15.1 million that went to the San Francisco AIDS Foundation and to HIV services at the Los Angeles LGBT Center.

AIDS/LifeCycle has raised more than $236 million since its first ride in 2002, making it the largest fundraiser in the world for HIV/AIDS. Joe Hollendoner, CEO of the San Francisco AIDS Foundation, praised the ride’s “heroes.”

“The commitment that AIDS/LifeCycle participants demonstrate to raising awareness and funds for HIV-related services is awe-inspiring,” said Hollendoner in a press release from AIDS/LifeCycle. “Without their drive, compassion and determination, our goals of reducing new HIV transmissions and increasing the health and lifespan of those living with HIV would be out of reach.

“I am proud to ride along these heroes as I participate as a cyclist in my first AIDS/LifeCycle,” he added.

The Los Angeles Blade profiled several cyclists, including Carol Hedges, who has completed 23 LifeCycle rides. An elementary school phys ed teacher from the Bay Area, Hedges said she rides for Maynard, her swimming instructor when she was 7 years old, who died of AIDS. Hedges also rides for Georgia, her student with spina bifida who died of AIDS-related illness. This time around Hedges raised $10,000.

“This year it couldn’t have been more important to ride, and I think that’s why I raised more than usual. I met a lot of great people and a lot of new people,” Hedges told the Blade.

Completing the weeklong ride is not an easy feat, but Lorri L. Jean, CEO of the Los Angeles LGBT Center, stressed the necessity of such fundraisers.

Participants range in age from 18 to 97 and come from across the country and around the world. Some are living with HIV; others are HIV-negative allies.

“We’re living in unsettling times when the health care of many Americans, including those living with HIV/AIDS, is at stake,” Jean said in the press release. “That’s why we’re more grateful than ever for the heroes—and sheroes—of AIDS/LifeCycle who are journeying 545 miles to help end AIDS and care for those living with HIV. They’re supporting the Center’s many HIV/AIDS-related services, including the free or low-cost health services of our Jeffrey Goodman Special Care Clinic and our vanguard work to protect people from infection.”