The latest data from UNAIDS on the HIV epidemic demands action on behalf of children and families. 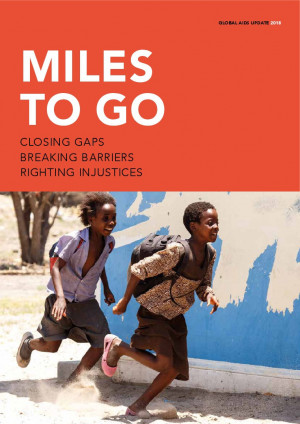 This time last year, many in the global health community were celebrating some heartening news: in its July 2017 annual report, the Joint United Nations Programme on HIV and AIDS (UNAIDS) declared that “the scales [had] tipped” in the collective effort to defeat the epidemic. Headlines seized on promising indicators—including that for the first time, more than half of all people living with HIV were taking antiretroviral drugs (ARVs), which not only fight the virus but also limit the risk of transmitting it to others.

But the 2018 UNAIDS report, released on Wednesday, July 18, displayed a striking shift in tone. In his introduction, executive director Michel Sidibé characterized prevention and funding efforts as in “crisis,” urging readers to view the report, titled Miles to Go: Closing Gaps, Breaking Barriers, Righting Injustices, as a “wake-up call.” The report makes clear that certain vulnerable populations — notably, children and adolescents — are consistently left behind in the struggle.

Unfortunately, this year’s sobering dispatch comes as no surprise to those of us working in pediatric HIV/AIDS. HIV-positive children invariably have had greater difficulty accessing ARVs than adults, and often are not diagnosed until the virus has irrevocably weakened their immune systems. Progress has been insufficient, even where much was expected and required; as a result, it seems all but impossible that the global community will meet the ambitious benchmarks defining our path toward an AIDS-free generation.

As an example, although ARVs have made it possible to prevent transmission of HIV from mother to child in nearly all cases, the UNAIDS report shows that the proportion of women who can reliably access the necessary drugs while pregnant and breastfeeding has barely budged since 2014, climbing by a single percentage point over the last year. Though the coverage rate for expectant mothers is relatively high — hovering at around 80% globally — it is still well below the level needed to prevent infant infections on a large scale.

Further, the report notes that ARV coverage for new mothers drops precipitously after delivery, so while children may be protected from transmission in utero, they are highly vulnerable while breastfeeding. Worse, in the regions where the HIV/AIDS epidemic is most critical, ARV coverage is appallingly poor: this year, less than half of pregnant and breastfeeding women in West and Central Africa had access to the ARVs that could keep them healthy and protect their children from infection. Given the recent sluggishness of progress toward protecting infants from HIV, it should follow that new infections in children have not decreased at all in the last year, or that among those children who are infected, the mortality rate has yet to decline.

Perhaps the most frustrating trend in this year’s report is the continued inadequacy of treatment for children living with the virus. In this year’s report, UNAIDS revealed that just 52% of children with HIV are taking ARVs, compared to 59% of adults. Children’s rate of access to medication is not only lower than adults’, but also slower to improve. Beyond these numeric inequities, there are considerable qualitative discrepancies between drugs for children and drugs for adults. Children’s HIV medications are generally less effective, more cumbersome to ingest, accompanied by greater side effects, and more prone to causing resistance. 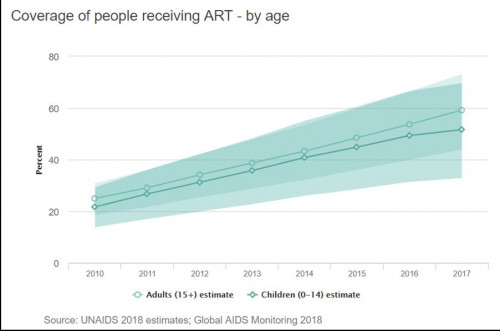 Yet there is a clear and realistic path to improving these circumstances. As the 2018 report notes, leaders from pharmaceutical companies, national governments, multilateral organizations, donors, and service organizations — including the Elizabeth Glaser Pediatric AIDS Foundation (EGPAF), where I serve as president and CEO — came together at the Vatican in November 2017 to develop a comprehensive plan for accelerating the development and dissemination of child-friendly ARV formulations. This meeting resulted in actionable commitments and detailed pledges, including promises by several drug manufacturers to make pediatric formulations available in low-income countries for the cost of production until generics become available.

As a result of that meeting, the United States Food and Drug Administration (FDA) is now developing guidance for the pharmaceutical industry on how it can accelerate research into pediatric ARV formulations and get new, better drugs for children to market much more quickly. And when EGPAF and other partners in the global AIDS response convene in Amsterdam this week for the International AIDS Conference (AIDS 2018) — the largest meeting on any global health issue in the world — we will discuss how to prioritize research of child-friendly treatment, move new drugs efficiently through the regulatory process, and drive uptake of new and superior medications for children.

Together, these developments constitute real momentum and demonstrate that children living with HIV have an important place on the high-level agenda. Yet if this year’s UNAIDS report has a bottom line, it’s that for too long, the global health community has allowed progress like this to breed complacency. Before we celebrate the potential of these moves on pediatric treatment formulations, let us generate and commit to similarly concrete solutions to those other troubling indicators — from stagnating progress on prevention of mother-to-child-transmission to unacceptably high rates of new infections and AIDS-related mortality among children.

This week in Amsterdam, I urge my colleagues and peers to keep UNAIDS’ latest report at the top of our minds. More importantly, I hope that we will allow the example set by the Vatican coalition and the FDA to inspire us. The promise of their work should lend urgency — and a sincere willingness to hold ourselves and each other accountable for our commitments — to the proceedings at AIDS 2018. If we do anything less than rise to that occasion, the 2019 UNAIDS report could be yet another catalogue of unkept promises. 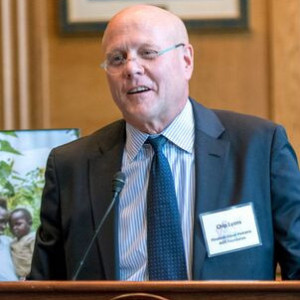 Charles Lyons is the president and CEO of the Elizabeth Glaser Pediatric AIDS Foundation, the global leader in the fight to end AIDS in children. From 2015-2016 Lyons served as U.S. representative to the executive board of UNICEF. He is currently a member of the Advisory Committee on Voluntary Foreign Aid (ACVFA).