To quote the president: SAD!

The Trump administration has been “notably absent from leadership on HIV/AIDS,” for most of its two years in power, according to a policy brief from the Fenway Institute, a center for research, education and policy development regarding LGBT and HIV-related issues. 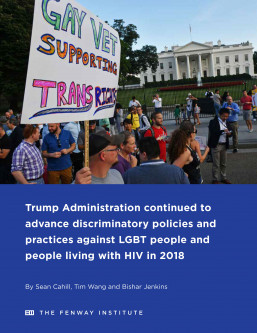 The 30-page brief is titled “The Trump Administration Continued to Advance Discriminatory Policies and Practices Against LGBT People and People Living With HIV in 2018.” You can read and download it (for free!) here.

“In just two years, we have witnessed the rollback of rights and protections that took decades to win. It’s difficult, if not impossible, to estimate the full extent of harm now taking place,” said Sean Cahill, PhD, director of health policy research at The Fenway Institute, in a Fenway press release. “It is undeniable that LGBT people and people living with HIV are now much more vulnerable to discrimination in health care, social services, employment, education, and access to basic government services.”

The institute is part of Fenway Health, a community health center in Boston that serves the LGBT and HIV populations.

The policy brief includes several sections relevant to HIV. In listing the Trump administration’s discrimination against people with HIV, the brief includes specific examples, such as:

But all the marks regarding HIV weren’t negative. The policy brief notes that in December 2018, Secretary of Health and Human Services Alex Azar said the HHS would update the National HIV/AIDS Strategy, which was launched in 2010 and updated in 2015 through 2020. What’s more, Azar said the update would highlight PrEP and address HIV disparities among African Americans, Latinos and gay men.

You can read a roundup of the Trump administration’s actions as they pertain to LGBT people in the Fenway press release. Of course, you’ll find many more details in the full policy brief.

In related news, Peace Corps volunteer Romany Tin was on the cover of POZ last summer. To read more about him and the HIV policies at the Peace Corps, click here.