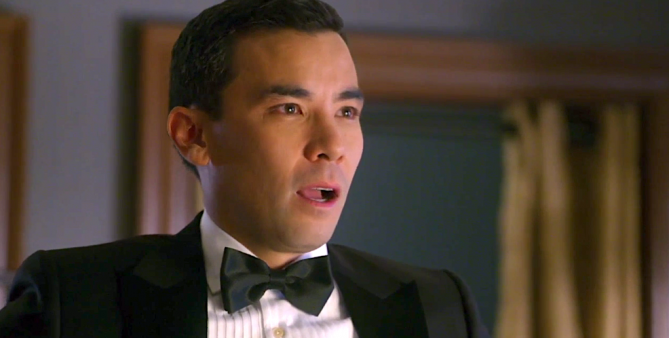 Fans of ABC’s How to Get Away with Murder have known since season 1 that Oliver (Conrad Ricamora) is living with HIV—and doing so quite well. Fast-forward to season 5, and we now find him engaged to Connor (Jack Falahee). With the wedding approaching, Oliver finally decides to disclose his HIV status to one of the most important people in his life: his mom (Mia Katigbak).

You can watch that disclosure scene on ABC.go.com. In conjunction with the episode, LGBT media watchdog GLAAD interviewed openly gay actor Ricamora about that scene and his experiences playing a gay HIV-positive character. GLAAD also helped out on the episode by introducing the show’s writers to people living with HIV, reports Variety.

In the video, Ricamora, 39, talks about growing up at a time when there was little to no representation of gay people or anyone with HIV in entertainment. “There’s so much shame built into your DNA,” he recalls of that time. Playing the HIV disclosure scene, he said, brought “back that terror, of wondering how they’re going to react. It’s terrifying. It’s like coming out again.”

“Living as a gay man, I get tested every year,” he tells GLAAD. “The first time, I was terrified. There weren’t even rapid tests so I had to wait like a week. And I remember that whole week thinking I was going to die. So [for this scene] I went back to that place and letting that inform my performance and everything I’ve done with Oliver from the first season.”

But 2018 is not the 1980s, when a diagnosis was a death sentence. “I hope we do reduce some of the stigma of living with HIV because people are thriving and living healthy lives,” Ricamora said. “We should reflect that back and continue to show people protecting themselves and talking about PrEP [pre-exposure prophylaxis], which we’ve done in previous episodes. But also showing that people that are living with HIV are people first, and laugh and get angry and cry and are three-dimensional people.

“Our show,” he continues, “is showing that people are thriving living with HIV, having their [viral load] become undetectable, and adding some levity and lightness to the situation.”