Beyond the Care Continuum

5 factors influencing the well-being of women with HIV

First the good news: Women living with HIV who participated in a Well Project survey are doing great in terms of the treatment cascade, also known as the HIV care continuum. Of the respondents, 99% were taking HIV meds, 98% were engaged in care and 85% reported having an undetectable viral load.

But these measurements are hardly the only way the survey gauges the health and well-being of people living with HIV. It also helps assess existing barriers and unmet needs. Published in a report titled Together We Are…Making an Impact, the survey findings underscore five main challenges women living with the virus face: HIV stigma; disclosure of HIV status; concurrent health conditions; mental health and trauma; and awareness and impact of U=U, which references the fact that people with an undetectable viral load cannot transmit HIV through condomless sex. 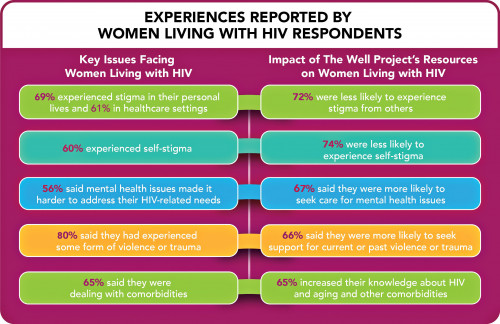 Described as “one of the most discouraging aspects of stigma” is the fact that 60% of women with HIV reported experiencing self-stigma, such as feeling ashamed, dirty or unlovable. On the plus side, survey respondents said using The Well Project’s online resources for women with HIV helped improve their health, increase their knowledge about HIV, connect with other women and advocate for themselves.

“We were disappointed to see that HIV stigma continues to be such a pervasive force,” says Krista Martel,  the organization’s executive director. “However, we were happy to see how significantly The Well Project’s resources decreased self-stigma and increased self-esteem among women living with HIV.” To learn more about the nonprofit, click here for a POZ Q&A with Martel.