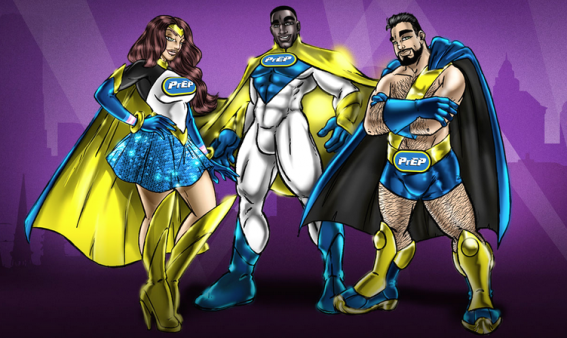 It’s a Bird! It’s a Plane! It’s the PrEP Superheroes!

Part of a PrEP awareness campaign launched this month by the Los Angeles County Department of Health, the superheroes will focus on reaching transgender women and Latino and African-American men who have sex with men.

“Despite significant progress in reducing HIV infections in LA County, HIV transmission stubbornly persists,” said Mario J. Pérez, MPH, director for Public Health’s Division of HIV and STD Programs, in a Protectors press release. “There continues to be a disproportionate impact among African-American and Latino gay men and transgender women, and PrEP is one of the best HIV prevention tools to address the impact on those populations.”

Currently, the only form of PrEP approved by the Food and Drug Administration is the daily pill Truvada.

The Protectors campaign will appear at gay events such as RuPaul’s DragCon and the Long Beach Pride parade.

You can learn more about the campaign at getprepla.com or watch the video introduction below.