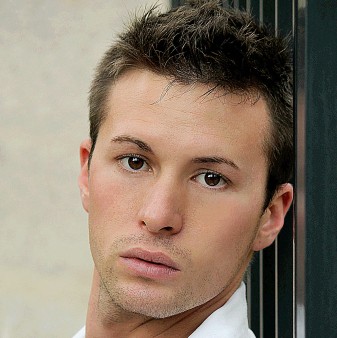 It was Christmas week in 2010. I was 20 years old. I had been very ill and was suffering from wasting syndrome. After losing around 50 pounds and going through extensive testing, my doctor finally sent me to an internal medicine clinic in Wichita. I told my doctor about all of the symptoms I had been having. He looked at me and said, “I’m almost certain you have HIV.” I didn’t know how it could be possible because two weeks before I got sick, I’d had a blood test that came back negative.

My doctor did a rapid HIV test and told me that I would find out in about 15 minutes. Fifteen minutes later he came back in the room and read the results to me. I was in shock. I could not believe it. I felt so alone and thought I would never be able to tell anyone. I didn’t know what I was going to do. I owned two pizza restaurants in small communities in Kansas and I just knew once the word got out that my business would be ruined.

I drove home two hours from Wichita to Great Bend where my partner at the time was waiting for me. It took me the entire two-hour drive and then some to find the words to say to him. Finally, I just said it. He looked at me and a tear came to his eyes and he held me. He said, “You’re going to be okay. You’re going to win.”

I started a regimen and quickly started doing as much research as I could. Knowing that it may take me some time to overcome the diagnosis, I decided to shut down and sell one of my restaurants. Throughout 2011, I traveled and learned as much as I could about what life would be like living with HIV. I started a job at a non-profit organization where I got certified to do rapid testing and safer sex counseling. I also began speaking publicly in schools about my experience with HIV.

At the beginning of 2012, I decided to start modeling and I gave up on my dream of building a pizza empire. I shut down and sold my other pizza restaurant and moved out of central Kansas. I now live in Kansas City where I continue to pursue my modeling career and will soon pursue a degree in sociology and public health.

It has become my dream to help change the stigma the world has placed on people living with HIV. It’s a new day and the advances are bettering the lifestyles of HIV positive people every day. I just want to do my part to help.

What three adjectives best describe you?
Humanitarian-concerned with or seeking to promote human welfare; visionary-thinking about or planning the future with imagination or wisdom; eccentric- unconventional and slightly strange.

What is your greatest achievement?
The fact that I can get out of bed everyday and treat it as a new day filled with opportunities to rectify the mistakes of yesterday and make for a better tomorrow

What is your greatest regret?
Not being able to see my projects through until the end

What keeps you up at night?
Knowing that somewhere, someone is struggling with their diagnosis

If you could change one thing about living with HIV, what would it be?
It would have to be the side effects that come along with taking the medications

What is the best advice you ever received?
Choose wisely who you disclose your status to

What person in the HIV/AIDS community do you most admire?
A model by the name of Matt Schiermeier

What drives you to do what you do?
My love for all people and our society’s continuous struggle for equality

What is your motto?
I will always thrive because I refuse to merely survive. I will convey compassion and philanthropy while being progressive in seeing my visions carried out.

If you had to evacuate your house immediately, what is the one thing you would grab on the way out?
My dogs, Angel and Bella

If you could be any animal, what would you be? And why?
I would be some type of lizard because they are able to adapt well to their environment.