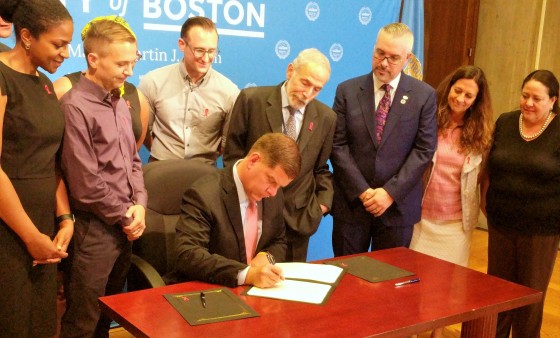 Boston Commits to Ending HIV by 2020

Viral suppression, also known as being undetectable, results in a longer and healthier life for people with HIV. What’s more, it is virtually impossible for people who are undetectable to sexually transmit the virus to others; this concept is referred to as “treatment as prevention” or TasP.

Launched in Paris on World AIDS Day 2014, the Fast-Track Cities global initiative encourages local action to achieve the 90-90-90 goals by 2020.

According to a press release by the AIDS Action Committee of Massachusetts (AAC), Boston has already met the first of three goals. The Massachusetts Getting to Zero Coalition, made up of 35 community-based organizations and state health centers, estimates that 90 percent of people with HIV in Boston (about 5,900 people) are aware of their status. What’s more, about 72 percent of those diagnosed with the virus are in care, and about 70 percent have an undetectable viral load.

“Joining Boston in the Fast-Track Cities Initiative is an act of leadership that will eventually wipe out HIV and AIDS in Massachusetts, and we’re grateful for Mayor Walsh’s commitment to this complex work,” said Carl Sciortino, executive director of AAC in the press release. AAC is leading the Getting to Zero Coalition in partnership with Fenway Health. “As federal leadership on public health falters and the White House proposes deep cuts to HIV/AIDS funding, this local leadership is exactly what is needed now.”