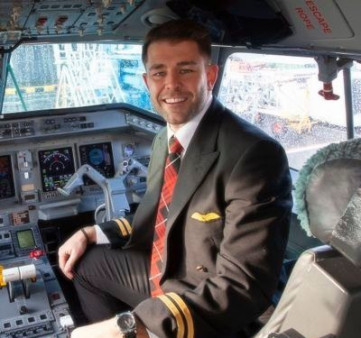 James successfully challenged rules on HIV which prevented him following his boyhood dream of becoming a pilot. ✈️???? #TheNine pic.twitter.com/8Pv0i5uv6W

Based in Glasgow and raised in Stoke-on-Trent, England, James Bushe, 31, dreamed of becoming a pilot since he was a boy. In 2017, however, his path to flight training hit a roadblock when he realized the U.K. Civil Aviation Authority (CAA) barred people living with HIV from acquiring the medical certificate necessary to become a commercial pilot.

He decided to fight the injustice—anonymously at first—with the help of charity HIV Scotland. He succeeded. The outdated rules were overturned, and Bushe completed his training and got a job as a pilot with Scottish carrier Loganair. On Saturday morning, January 11, he made history by becoming the first person with HIV in Europe to earn a commercial license and fly a commercial plane.

An awesome afternoon with @SkyNews and @BBCRadioWales. Still have 3 days in London and looking forward to sharing my story and our message with EVERYONE whilst I’m here. We’ve changed the rules, but now it’s time to rewrite the book. It’s 2020, and HIV, has changed.

He also came forward and revealed his name.

“I just wanted to be able to deliver a message to anyone else living with HIV who has been discriminated against, who faces barriers to employment or who wants to be a pilot, to say to them that it absolutely is possible,” he told Buzzfeed.

Bushe added that rugby legend Gareth Thomas, who revealed his HIV-positive status to the world in September 2019, had inspired him.

Regarding the original CAA rules barring people with HIV from becoming pilots, Bushe noted that they were based on outdated medical knowledge and that people with HIV who take medication today are perfectly healthy and able to fly planes—notably, they don’t suffer from cognitive issues because of HIV. What’s more, under the old rules, pilots who contracted HIV after having received their license could continue to fly but anyone with HIV couldn’t train to become a pilot. It made no sense.

Loved sharing my story with @BBCRadioWales this evening, and so awesome to have the chance to pass on my thanks to @gareththomas14 for laying down the path that I have followed. We are HIV+... and we’re ok! Let’s stop the stigma!

Before the CAA changed its policy, it had been interpreting the rules set forth by its regulatory agency, the European Aviation Safety Agency. The EASA, according to Buzzfeed, is currently reviewing its HIV policy.

In the United States, people with HIV can become pilots, according to the Aviation Medicine Advisory Service, which offers guidance regarding the Federal Aviation Administration’s medical certification process.

In related news, see “Rugby Star Gareth Thomas ‘Forced’ to Disclose He Has HIV [VIDEO]” and “‘I Have Absolutely No Fear of Passing on HIV to My Husband!’—Gareth Thomas Discusses HIV With Prince Harry.”