People living with HIV are meeting the accelerating challenges of the opioid epidemic.

When Jerrica Hall pushes the stroller holding her 2-year-old daughter, her younger child, down the sunbaked streets of Austin, located in Scott County, Indiana, she remembers the time—the years, really—when she walked down these same streets with a very different purpose. Seven years ago, newly diagnosed with HIV, Hall numbed the shock of her diagnosis by continuing to inject drugs—first the prescription opioid Opana (oxymorphone) and then heroin. Sex work helped her survive. 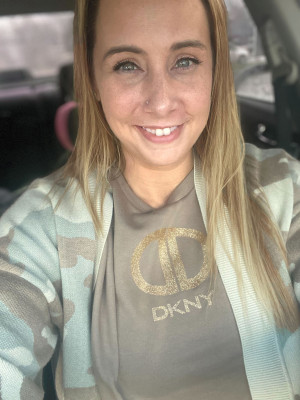 Today, Hall, 31, is in recovery. She is taking HIV medications and has an undetectable viral load. And she helps other people who, like her, acquired HIV in Scott County during the 2015 outbreak. She works as a linkage-to-care and outreach specialist at the clinic where she gets treated for HIV, Foundations Family Medicine.

“When someone’s in the dark and they come to the light,” she says of her work, “they can help someone else.”

While the opioid and injection drug use epidemic has slowed in her part of Indiana, she still knows and loves plenty of people who inject drugs. There are lots of people like Hall.

According to a November 2021 POZ.com poll, 37% of respondents nationwide knew at least one person—sometimes up to four—who had died of an overdose. Last year, 103,598 people died of drug overdoses, and 77,766 of those deaths were attributed in whole or in part to opioid use, according to data from the Centers for Disease Control and Prevention (CDC).

So far, evidence-based harm reduction practices, such as syringe services and the distribution of naloxone to reverse overdose, have not curbed ongoing HIV outbreaks, leading epidemiologists like Steffanie Strathdee, PhD, associate dean of global health sciences and a professor of medicine at the University of California at San Diego, to warn that “the trends are going in the wrong direction.”

“It’s a substance use epidemic, with opioids being one player in that,” says Strathdee, who studies the overlap of the drug use and HIV epidemics along the U.S.-Mexico border. “More than 100,000 deaths last year. And it’s getting worse.”

More than 77,000 deaths as a result of opioid use in 2021 is a staggering increase over 2017, when about 47,000 people died of opioid-related overdoses. Most of these deaths were attributed to fentanyl, a synthetic opioid up to 100 times more powerful than morphine. Today, fentanyl is cut into everything from methamphetamine to cocaine, says Strathdee, so people may take it without even intending to.

The COVID-19 pandemic exacerbated the opioid epidemic, leading to an increase in overdoses. According to data published in the journal Population Health Management, tests conducted at a national laboratory following the declaration of the pandemic emergency in March 2020 revealed that positive tests for fentanyl increased by 35% and positive tests for heroin rose by 44%. Fentanyl contamination increased by 89% among people who also tested positive for amphetamines, 48% among those who used benzodiazepines, 35% among those also using cocaine and 39% among those using other opiates. Researchers attribute much of this to pandemic-related stress and a worsening of mental health.

People who were already in recovery sometimes found it difficult to get the medication-assisted treatment—which can include prescription buprenorphine—needed to help manage their opioid use disorder. On top of that, pandemic isolation often disrupted social support networks, which have been found to be essential for drug use recovery.

Then there’s COVID itself. Substance use disorder is one of the underlying conditions associated with a greater likelihood of getting SARS-CoV-2, the virus that causes COVID-19, and people who’ve ever had a substance use disorder diagnosis are also more likely to have severe COVID symptoms, according to the National Institutes of Health (NIH). This is true even for people who have received COVID vaccines.

But SARS-CoV-2 is not the only virus people who use drugs are more likely to get. Since 2017, sharing of syringes has driven HIV outbreaks in West Virginia, Minnesota, Pennsylvania and Oregon, among other places. Reusing injection equipment can also transmit hepatitis B and C.

In the United States, about 11% of people who acquired HIV in 2018 (nearly 4,000 individuals) did so through reusing injection equipment. That includes 1,468 gay and bisexual men. Globally, 76 million people have acquired HIV through injection drug use since the beginning of the AIDS epidemic.

An analysis of 2018 data published by the CDC found that while everyone who acquired HIV had either shared injection equipment or had unprotected sex or both, Black people reused other people’s syringes less often, had lower rates of condomless sex and got tested for HIV more often than their white counterparts. Still, they had the highest likelihood of acquiring HIV. When researchers looked at the causes, they found that while 63% of white study participants had access to sterile syringes through syringe exchange programs, only 40% of Black participants did. Black folks were also 10% less likely than their white peers to access medication-assisted treatment.

The good news is that abundant evidence points to several effective ways to control the opioid epidemic and address the spread of HIV and viral hepatitis via reused syringes. These include housing-first programs that don’t require people to abstain from drug use to get housing, decriminalization of both drug use and sex work, syringe services programs and access to HIV prevention, like pre-exposure prophylaxis (PrEP), at syringe service sites.

“We wanted to build off what we learned from the HIV epidemic,” says Strathdee, who at a 2020 AIDS conference proposed the creation of an HIV and addiction medicine subspecialty. “You don’t blame people for their behaviors. We are creating the social, political and economic conditions that are putting people at risk. So the onus really needs to be on governments and policymakers.”

But policymakers have produced mixed results in relation to the opioid epidemic, especially in areas where lack of access to sterile syringes has led to HIV outbreaks. For instance, in 2019, the Department of Justice blocked the opening in Philadelphia of the United States’ first legal supervised drug consumption site.

In 2021, the West Virginia legislature approved a bill that limits syringe programs by forcing clients to show ID to obtain services and also requires the programs to obtain specific licenses from local jurisdictions. Officials with the health department of Scott County, where Hall acquired HIV and started recovery, voted in 2021 to close the syringe services program credited with ending the 2015 HIV outbreak.

At the same time, Strathdee says she sees some cause for hope. For the first time, the White House Office of National Drug Control Policy is being run by a physician, and the office’s inaugural National Drug Control Strategy, released in April, includes evidence-based approaches to decreasing overdose deaths. These include the distribution of naloxone and fentanyl test strips and expanding licensing for medication-assisted treatment.

The office has also released a template bill for state legislatures to use to expand access to syringe services programs, and White House drug czar Rahul Gupta, MD, MPH, told CNN’s Sanjay Gupta, MD, (no relation) that he is open to learning more about safe consumption sites along with all other harm reduction approaches.

And while Philly’s supervised consumption site was never able to open, two such sites opened in New York City in November 2021; by January, they had already averted more than 100 overdose deaths. Safe consumption sites are also under consideration in Boston, Baltimore, Denver, San Francisco, Seattle and other cities.

In San Diego, long a conservative stronghold, Strathdee says the department of health is interested in investing in a new piece of equipment for its syringe services program that can test samples of street drugs to help people figure out what they’re taking. It’s not as big a deal as drug decriminalization or sex work decriminalization, which have also proved effective in curbing opioid epidemics, but it’s something, she says.

On the scientific side, the NIH’s Helping to End Addiction Long-term (HEAL) Initiative is looking at addiction from all angles. This includes attempting to create an opioid vaccine at the National Institute of Allergy and Infectious Diseases, developing new treatments for opioid use disorder at the National Institute on Drug Abuse and studying ways to pinpoint the cause of chronic pain that now requires opioid pain control.

Already, some data are emerging. For instance, a 2022 study found that people who received buprenorphine-assisted opioid treatment while in jail had a 32% lower rate of reincarceration, court charges and probation violations. “There’s been a real sea change, which is positive,” Strathdee says.

There is also some good news on the horizon for communities impacted by the HIV and opioid epidemics. In West Virginia, a judge recently stopped the implementation of the state’s restrictive syringe exchange law. In Florida, the Miami-based IDEA Exchange, which offers syringe services and medical care, expanded to serve statewide.

And in Scott County, Hall is now the president of the board of Holding Space Recovery Project, a nonprofit community group born out of the closure of the county’s syringe exchange program and run by Kelly Hans, who’d helmed the county program. Hans works with the recovery center THRIVE as well as with Hall’s boss, the family medicine doctor William Cooke, MD, who first identified the county’s HIV outbreak.

Holding Space has received the support of the Austin City Council to open a multidisciplinary center to serve people who inject drugs. It will offer harm reduction services, primary and gynecological care, food and clothing and screening for HIV, hepatitis C and other sexually transmitted infections. Hall will be there once or twice a week to run peer support groups. If people test positive for HIV, Hall and Foundations Family Medicine will link them to care. If they are negative, they can get connected to PrEP. Right now, the team is hoping for council approval to reinstate syringe services, says Cooke.

And it won’t be a moment too soon. Cooke says he’s already seen an uptick in soft tissue infections—deep infections from injecting with reused syringes, spinal infections and even sepsis—all early warning signs that people are reusing needles again. One syringe containing HIV is all it would take to spark another outbreak.

Cooke and Hall—whom Cooke has treated since she was a cheerleader in high school—have spent hours at city council and public health meetings arguing for these evidence-based approaches.

“People can only make healthy choices from the options that are available to them,” Cooke says. “Unfortunately, a sterile syringe is not something that people have a choice to use right now. So hopefully, in the next few months, the new syringe service program will open.”

For Hall, getting HIV wasn’t a blessing—she wouldn’t say that. But it has opened the door to a new life. Today, she is remarried. Her oldest child, who was just months old when she received her HIV diagnosis, is now 7 years old.

“It has changed my life completely,” she says of her collaboration with Cooke and working with other people living with HIV.

“When you help someone along this process and see their families come together and see them become a totally different person—it just makes you want to keep going and not stop,” she says. “So once they have gotten back on their feet and they are productive members of society, they get to pass that along to someone else. And that’s happening in Scott County right now.”