The number of people treated with direct-acting antiviral therapy for hepatitis C has steadily declined.

The number of people treated with direct-acting antiviral (DAA) therapy for hepatitis C has steadily declined, reaching a low point in 2020. According to the IQVIA prescription claims database, 843,329 people in the United States started treatment from 2014 through 2020. Just over 109,000 were treated in 2014—the first year next-generation DAAs were available—rising to more than 164,000 in 2015, reflecting a backlog of people awaiting simpler, more effective treatment. Between 114,000 and 134,000 people were treated each year from 2016 through 2019. But the number fell to about 84,000 in 2020, the first year of the COVID-19 pandemic—far below the 260,000 people who would need to be treated annually to eliminate hepatitis C as a public health threat by 2030. The proportion of baby boomers and those covered by commercial insurance or Medicare declined over time, while the proportion of younger people and those on Medicaid rose, reflecting a shift in the hepatitis C epidemic in conjunction with the opioid crisis. 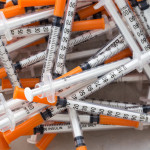