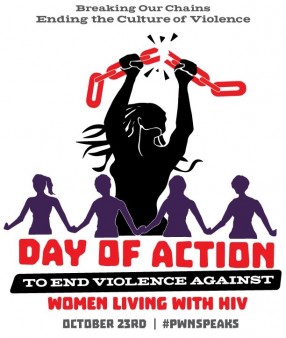 These four demands are central to advocacy efforts on Sunday, Oct. 23.

The Day of Action to End Violence Against Women Living With HIV 2016 is marked Sunday, Oct. 23. Led by the Positive Women’s Network–USA, the advocacy efforts aim to “highlighting the many forms of violence impacting women living with HIV and their communities…and to offer solutions and ways that government, institutions and organizations can help prevent and mitigate violence and trauma,” according to a PWN-USA press release.

“Ending violence against WLHIV [women living with HIV] means ending all forms of violence, including state-sanctioned brutality and institutional violence,” states a fact sheet on the topic, explaining that HIV criminalization, policing and incarceration contribute to the high rate of interpersonal violence, sexual assault and trauma among WLHIV.

“This structural violence must also be accounted for as a form of violence against WLHIV, on its own,” according to the fact sheet. “These different forms of violence and trauma lead to poorer mental and physical health outcomes, negatively impacting the ability to engage in healthcare and to maintain adherence to lifesaving medications.”

The press release spells out four demands on the day of action:

To promote and follow the day of action on social media, look for these hashtags: