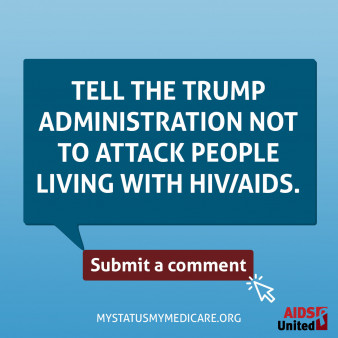 More than 250,000 people living with HIV would be affected by a proposed rule change to Medicare Part D.

AIDS United is calling on you to take part in its Digital Day of Action today, January 23.

The goal is to stop a proposed rule change to Medicare Part D by the Trump administration. The rule would change the “protected class status” of antiretrovirals under Medicare Part D, rendering it more difficult for people living with HIV to have direct access to the best treatments prescribed by their provider.

According to AIDS United, “If enacted, the Administration’s proposed rule change would clear the way for insurance companies to control decisions about patients’ access to drugs, rather than providers working directly with patients they treat.”

Such a decision could ultimately harm the lives and health of more than 250,000 Americans living with HIV who rely on Medicare. It could force many people off medications they need and lead those who are newly diagnosed to turn to unhelpful therapies.

So what can you do about it? If you’re a person living with HIV, a health care professional or an advocate, visit MyStatusMyMedicare.org by January 25 to share your story and explain why you oppose the proposed change to Medicare.

You can also fight back by sending an email to your subscribers, posting on social media, sharing AIDS United’s call to action and participating in a Twitter chat at 3 p.m. ET today by using the hashtag #mystatusmymedicare.

A tool kit with an email template, sample social media posts and graphics is also available.