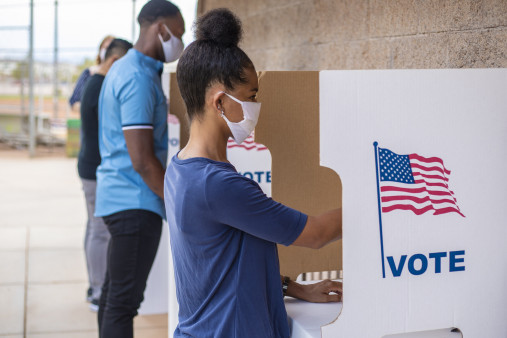 An HIV advocate urges those of us living with the retrovirus to stay in contact with our elected officials.

What a time to be alive. We witnessed an election where the impossible happened. Georgia voted for a Democratic president and two Democratic senators. Many people in the progressive LGBTQ community are celebrating, and rightfully so. A victory like this cannot and should not be trivialized.

But now what? Did President Joe Biden, Vice President Kamala Harris, Senators Rev. Rafael Warnock and Jon Ossoff win simply because of the hatred of Donald Trump? Are we ready to go home now, be quiet and wait to see what happens? Absolutely not.

Although a Democratic government is perceived to be better for the LGBTQ community and is always considered a positive for the Black community, it is our job to continue our vigilance and make sure our voices are heard as policy decisions are made.

Here are some items that we need to be aware of as President Joe Biden and the Democratic Congress begin implementing the Biden agenda:

● Regarding HIV, the US PLHIV Caucus wrote in the congratulatory letter sent to the Biden Administration: We need an effective Office of National AIDS Policy (ONAP), and a Presidential Advisory Council on HIV/AIDS (PACHA) where those most marginalized in HIV care are at the center (people living with HIV, people of color, people of trans experience, sex workers and people who use drugs). Also, the United States has turned away from its global leadership role: we must reinvest in the World Health Organization (WHO), especially during a pandemic, and push PEPFAR leadership to include key populations (who are over 60% of new diagnoses globally) and community-led responses in the funding and policies.

● HIV criminalization continues to increase stigma and unfairly target our communities. We need the House and Senate to vote on and pass the Repeal Existing Policies the Encourage and Allow Legal (REPEAL) HIV Discrimination Act.

● Despite the wins in Georgia, voter suppression is still alive and well. In the South, discriminatory voter ID laws, the closing of polling locations, and other tactics are being employed to stop people from voting. The Biden administration must bring H.R. 4, the “John R. Lewis Voting Rights Act of 2020,” back up for a vote.

● As soon as possible, bring up a budget reconciliation bill that should include:

● Expanded eligibility for subsidies to the Affordable Care Act (ACA)

● Add a public option to the ACA

This is not an all-inclusive list of demands, but it is a significant start. The phrase “Elections have consequences” has been pounded into our heads since the Senate majority changed in 2015. Now is the time for this election to be consequential to those who have been obstructing the lives of Black people in the LGBTQ community, especially those of us living with HIV.

So what do we need to do to make this happen? Dr. Babasaheb Ambedkar said, “educate, agitate, organize.” Thanks to Stacey Abrams (Fair Fight Georgia), Nse Ufot (New Georgia Project) and many other community activists and organizers, it has been proven that solid organization wins elections, but now we must organize to legislate. We must stay in contact with our elected officials. Don’t just write and tweet, when the pandemic is over, get on their schedules. Meet with them regularly. Stay in their face. Agitate.

Here is a sample script of what you might say, based on two of the demands noted above: “Senator Warnock, congratulations on your victory. Will you be asking Senator Schumer to bring the John R. Lewis Voting Rights Act to the Senate floor? When? Will you be voting for it? Senator Ossoff, HIV criminalization, is discriminatory and dangerous. It creates a barrier to testing, keeping people from knowing their status. In Georgia, LGBTQ citizens are more likely to be living with HIV than their counterparts in southern states, according to the 2019 Southern LGBTQ Health Survey.”

Get involved with a local agency in your community. Find out who is meaningfully involved in policy advocacy. Educate yourself on the issues and educate your friends. Advocacy starts with you.

No, Truvada and Descovy PrEP Are Not “AIDS Vaccine Pills”