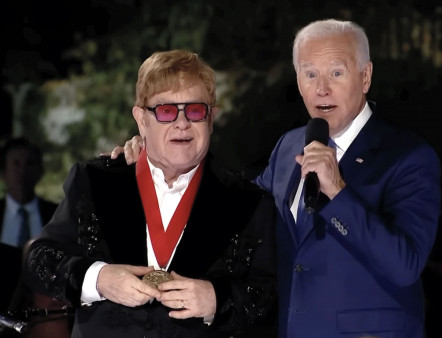 Elton John Gets Medal for His HIV Advocacy

Pop music legend and AIDS advocate Elton John certainly felt the love in September as he performed an intimate concert at the White House.

During the set, President Joe Biden surprised the “Rocket Man” scribe by presenting him with the National Humanities Medal for his work advocating and fundraising for HIV and advancing “the simple truth that everyone deserves to be treated with dignity and respect.”

“I’m never flabbergasted,” John told the crowd on the South Lawn as he was moved to tears. “But I’m flabbergasted and humbled and honored by this incredible award from the United States of America. I will treasure this so much.”

John, a global celebrity since the 1970s, performed a mini-concert of his classic hits—including “Tiny Dancer,” “I’m Still Standing,” “Rocket Man” and “Your Song”—as part of the White House’s “A Night When Hope and History Rhyme,” which honored everyday history makers, including teachers and frontline workers.

A longtime advocate for HIV causes, John has tirelessly raised funds and shone a global spotlight on the epidemic through concerts, speeches and star-studded fundraisers, like his annual Oscars party, which this year brought in $8.6 million. In 1992, he established the Elton John AIDS Foundation, which has raised over $525 million worldwide and supported more than 3,000 projects to date.

John last performed at the White House in 1998 at a state dinner hosted by President Bill Clinton, according to NPR. President Donald Trump invited John to perform at his 2017 inauguration, but the singer-songwriter declined, saying he felt it was inappropriate for him, as someone from Britain, to play at the event.