Keeping people with HIV in consistent care and on treatment for the virus is vital to ensure they benefit from an undetectable viral load.

In the overall effort to improve the woefully inadequate rate of viral suppression in the U.S. HIV population, keeping people living with the virus in consistent medical care is of the utmost importance. Without such ongoing retention in care, people living with the virus cannot maintain their antiretroviral (ARV) treatment prescriptions. Consequently, retention rates are strongly associated with the proportion of HIV-positive individuals who have an undetectable viral load.

The urgency to increase rates of full suppression of HIV is driven by the awesome two-fold benefit of sustaining an undetectable viral load. Not only does successfully treating HIV vastly improve lifetime health prospects and life expectancy, it also blocks transmission of the virus. Countries in Africa, such as Swaziland, that have dramatically raised their viral suppression rates thanks to intensive foreign aid have seen correspondingly dramatic declines in new cases of the virus in recent years.

In 2017, the Centers for Disease Control and Prevention (CDC) estimated that just 53% of the U.S. HIV population had full viral suppression. This figure puts the nation squarely at the bottom of the viral-suppression rankings among comparably high-income nations, according to a recent analysis by the Kaiser Family Foundation. The United Kingdom, Switzerland and Sweden top the list with rates exceeding 80%. 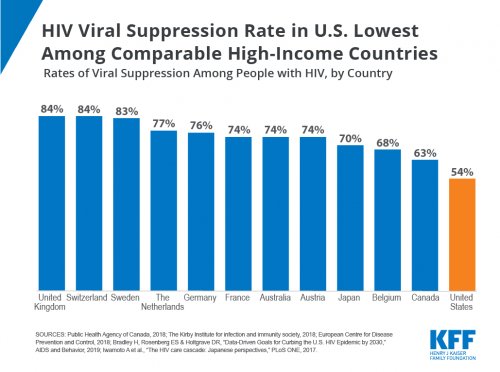 With all these pressing matters in mind, a team led by Ashley N. Anderson, PhD, a postdoctoral researcher at Emory University in Atlanta, conducted a systematic review of 20 published studies that identified disparities in rates of retention in care for HIV. Their resulting paper, published in AIDS and Behavior in September, amounts to the first review of the literature on this important topic.

The ultimate goal is to identify particular demographics and risk factors of individuals who have lower retention in HIV care so that researchers, health care providers and public health workers may better customize targeted interventions meant to improve retention.

Strong trends emerged in the literature review, which betrayed considerable retention-in-care disparities based on race, age, region and the likely mode of HIV acquisition (also known as risk category, such as injection drug use versus sex between men).

The 20 studies included in the review were published between 2009 and 2018 and conducted in the United States and included HIV-positive participants who were at least 13 years old. The racial demographics of the collective participant populations were diverse, with all the studies including Black individuals and 17 including Latinos. Seventeen papers included men who have sex with men (MSM) and all included women. Studies that targeted people released from incarceration as well as low-income individuals were also included.

The evidence provided by the overall collection of studies, the review authors concluded, was either of good or high quality. Nine studies boasted a low risk of bias across an array of key criteria.

To define retention in care, the studies relied on measures based on lab tests or medical appointments or a combination of these criteria. For example, a common definition of remaining in consistent care for HIV was having at least two CD4 or viral load tests conducted at least three months apart during a 12-month period. Similarly, appointment-based indicators often considered an individual retained in care if he or she had two HIV medical provider visits at least 90 days apart within 12 months.

Owing to the variability of these definitions, the review authors could not standardize them and thus have the opportunity to conduct a meta-analysis of the data. Consequently, their findings do not include specific figures identifying the magnitude of any disparity.

Perhaps most importantly, the review found that Blacks living with HIV have lower rates of retention in care compared with their white counterparts. In 2017, African Americans made up 13% of the population yet accounted for 43% of new HIV diagnoses. Such race-based findings held after investigators adjusted data to account for differences in age, sex, HIV risk group, socioeconomic status, health literacy (the ability to understand health information) and other individual and neighborhood factors.

The findings regarding disparities between Latinos and whites, on the other hand, were inconsistent across the papers included in the review.

A pair of studies analyzed retention disparities over extended periods of time. One found that 12 months after individuals enrolled in HIV care, there was no significant retention disparity between Blacks and people of other races. But 24 and 36 months after enrollment, Blacks had lower retention rates than non-Blacks. Another study’s findings indicated that compared with whites and Latinos, Blacks were the least likely to remain in consistent care during all three successive years of follow-up.

Such findings, the review authors concluded, suggest that “racial disparities are likely established in the first one or two years after [individuals test] positive for HIV and that racial disparities persist over time.”

Inconsistency also characterized the findings regarding sex-based retention disparities. However, gaps in this category were indeed apparent when figures were further broken down by race. Among Black individuals as well as among those Latinos born in Mexico or Central America, men had lower retention compared with women.

There was a clear trend indicating poorer retention in care among younger people with HIV compared with their older counterparts, a pattern that appeared to hold regardless of race. Certain papers suggested that retention was associated not just with age but, more specifically, the age at which individuals entered care for the virus. Thus, those who entered care at about 50 years old had the highest retention rates compared with those in younger age brackets.

Looking at risk groups, the paper’s authors found that people who inject drugs (PWID) or who have a history of doing so have lower retention rates compared with MSM. However, one study found that retention rates among PWID have improved over time.

Research suggests that MSM have higher retention rates than those in other risk groups. Evidence largely indicates that among MSM, Blacks are retained in care at lower rates than whites. On the age front, MSM younger than 35 had lower rates compared with their older counterparts, according to several studies. One paper indicated that among young MSM, whites were actually less likely to be retained in care compared with Blacks and Latinos.

Unfortunately, the relevant scholarship on retention rates among those recently reentering society from incarceration is thin. One study did find, however, that those released from prison had lower retention rates compared with control groups of individuals in the same community.

Geographically, those living with HIV in the West and South have poorer retention than those in the Northeast of the United States. Within the South, Blacks have lower rates than whites.

Reflecting on the review’s findings with regard to various intersectional demographics—those that reflect overlapping categories, such as race, sex, age or the sex of an individual’s sex partners—the paper’s authors suggested that those seeking to improve retention in care in the United States should peer through the intersectional lens in order to gain a better understanding of what drives disparities in retention in care.

Those various demographic categories, the investigators write, “may intersect at the individual level to reflect oppressive political and societal systems, such as racism, sexism or ageism. These oppressive structures are also highly connected, and their cumulative effect may magnify a particular HIV health disparity.”

The authors pushed for more research into the drivers of disparities in retention in HIV care.

“Many inequalities, also known as determinants, are avoidable and are a result of unequal access to resources,” they stated.

Such determinants, a growing body of research suggests, include mental health, social support, socioeconomic status, stigma and relationships between people with HIV and health care providers.

“Collaborative efforts are ultimately needed to reduce disparities in retention in care and to improve HIV health outcomes,” the researchers finally concluded.