Chris’s partner Roger died in 1990, leaving behind a child. Today, the now-adult son seeks details about the dad he never knew. In honor of Valentine’s Day, here’s their long-lasting love story.

“It was a love-at-first-sight situation,” recalls Chris Pimentel of the night he met Roger Vasquez. It was 1989, and the young men—Chris was 22 and Roger four years older—were introduced by a mutual friend at the Los Angeles dance club Catch One. Both men were Latino and Capricorns, and they bonded over their similarities. The relationship developed quickly, and they moved in together.

“We were deeply in love,” Chris, now 54, tells POZ. “He was my first boyfriend. He was a very kind person and gentle with me. I was happy to find someone who loved me.” 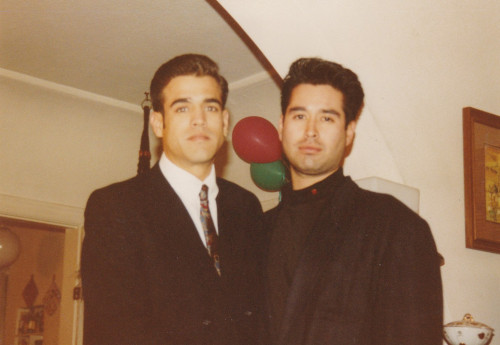 Chris, however, wasn’t Roger’s first serious relationship. Roger had been married to a woman he met at cosmetology school with whom he fathered a child, Jason, but he lost custody of his son when they divorced. “It was a source of pain and heartache that he couldn’t see his son,” Chris says.

But soon after Chris and Roger got an apartment, another pressing issue demanded their attention: An ex-boyfriend of Roger’s notified him that he had HIV. Roger got tested and discovered he was also HIV positive. “He was scared I would leave him,” Chris says, “but I was like, ‘I love you, why would I leave or end this?’”

Roger “wasn’t sick or bedridden much of the time,” Chris says, “but then it accelerated. I remember he was babbling to himself and saying strange things. I took that as a cue to get him to the hospital. I had to carry him down two flights of stairs, literally, to the car and then race down the freeway from Huntington Beach to Long Beach. They took him in right away. He was turning blue, and they needed to get oxygen in him. He was intubated, so we didn’t get to have a further conversation. I remember he was so scared. I can still see the fright in his eyes.”

Chris expected his partner would be hospitalized a few days and then return home. Sadly, Roger Vasquez died. It was 1990, and he was 28. 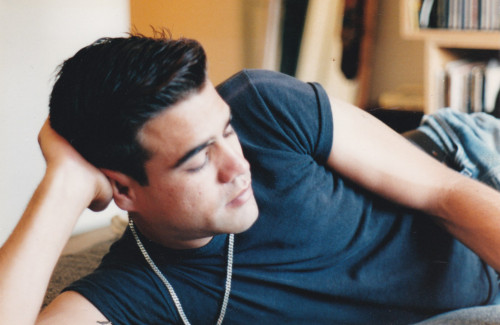 Looking back at that period, Chris considers himself a long-term survivor even though he is HIV negative. “I survived those traumas of that time,” he says. “Oddly, I didn’t seek any professional mental health or care. I didn’t go down a deep spiral. I had a good circle of friends who loved me.” Chris’s mother had died shortly before he met Roger, and that likely helped him deal with Roger’s death. “In a very odd coincidence,” Chris recalls, “when my mom and Roger passed, I had dreams separately about each of them, and each dream was the same—they both told me everything was going to be OK. I know it was probably my psyche telling me this, but I felt peace from that. I really did.”

Chris continues the story: “After Roger passed away, I moved out of the apartment we shared. I had a box of his things and thought, This is properly Jason’s stuff. But I knew the circumstances and that I wouldn’t be able to give them to him until he’s at least 18. Over the years, as the internet became popular, I would look for him, but I didn’t have the best information. I had hope we’d find each other somehow.”

Growing up in Orange County, California, Jason Prefontaine, who is now 38, didn’t exactly fit in. “It’s very white here,” he says, “and my dad is Mexican.” That’s about all Jason knew about his biological father, Roger Vasquez. 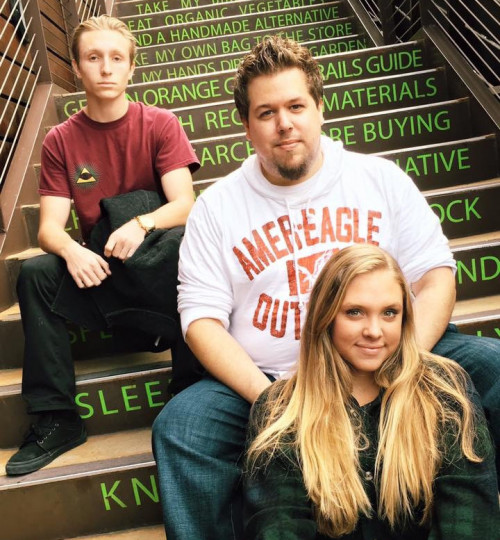 “I have very few memories of Roger, and whenever I asked my mom or the family about him, I was shut down. I was told he was not a great person. I think it was more to hide the fact that he was gay. I didn’t even find out that he had passed away until I was in high school. I was looking through files for something during my senior year and found his death certificate. That’s how I found out. I had always thought I’d meet him one day, so that was a shock.”

The death certificate listed Roger’s HIV status and his parents’ contact information. “It took me a while to get the nerve,” Jason says, “but I finally called them. But once I got to know them a little, I realized they didn’t really support Roger much. I think mainly because of the gay thing.”

Meanwhile, Jason was dealing with his own sexuality. Shortly after graduating high school, he came out as gay. “My family is Mormon. It was extremely hard for them,” he recalls. “When my mom first found out, she kicked me out. So I was homeless for a while, sleeping in people’s houses.” That’s when he really felt the absence of his father. “Because he was gay, I wish he would have been in my life—it would have been easier having that support.”

During this challenging time, he met and fell in love with Gary. Eventually Jason’s family came around. “Now everyone in the family accepts me,” Jason says. “It just took them a while to get there, but they did get there. And thank God I fought for my family, because we’ve never been closer.” As for Gary? He and Jason got married in 2008 and remain together. 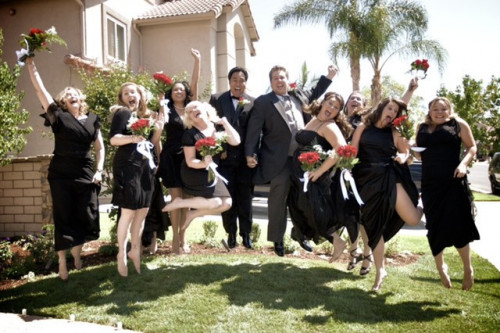 Jason and Gary’s wedding in 2008Courtesy of Jason Prefontaine

Over the years, Jason had posted memorials to his dad on social media on Father’s Day. But last year, he decided to do so on World AIDS Day, marked each December 1.

The team at the Instagram account @TheAIDSMemorial, which posts tributes to those lost to AIDS, read Jason’s writeup and asked to include it in their feed.

Posted on December 6, 2020, along with a 1982 photo of a mustachioed Roger holding his infant son, the text read: “I want to honor my dad who lost his life to AIDS. Sadly, I don’t have a lot of information about him. He passed away when I was just a kid. His name was Roger Vasquez and he was a musician who sang and played guitar. He was also a composer. My father passed away when I was about 7 years old. He had a rough life up until then. He was trying to discover who he was as a closeted gay man. Before he died, he found a man who loved him for who he was. That man took care of him until he passed away in 1990. This picture is one of the only pictures I have left of my father. I will always cherish it. Dad, you are loved and you are missed!”

Chris, who now lives in San Francisco, remembers the moment he saw the Instagram post. “I’m a traditionally trained hula dancer—not by career, but it’s something I spend a lot of time on—and I was getting ready for a Zoom performance. I was waiting for my cue to go on and scrolling on my phone, and I came across the post. I just froze. In that moment, so many memories came back to me. It was like a tidal wave.”

Chris needed a day or two to process his feelings and memories. “I was surprised at how much emotional detail—what my feelings were at that time—came back to me,” he says. “I remember a Tears for Fears concert Roger and I went to in Orange County, and I remember the quality of the light of the sky and the air temperature and the look in his eyes. It was overwhelming, but in a good way. I was happy for it, but at the same time, it was a lot.”

When Jason first received the text message from Chris, he didn’t know if it was genuine. For proof, Chris sent him some pictures, but Jason wasn’t easily convinced. “I had always had only three pictures of Roger my whole life,” Jason says, noting that Chris’s photos were taken several years after his own pictures and that Roger looked different. He had to show them to his mom. “She said, ‘Yeah, that’s him.’” 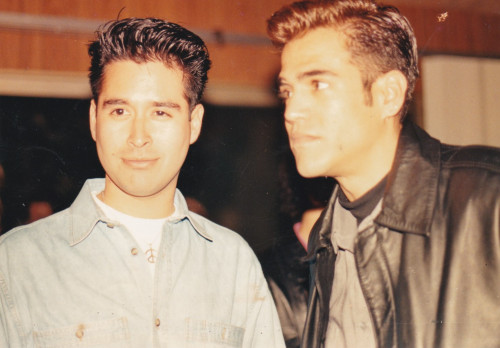 Chris and Jason began a regular correspondence via text, then phone. “Now we’re calling back and forth. We’re more like friends,” Jason says. “And he kept my dad’s things all these years. It has been amazing to talk to Chris and fill in the gaps. I always heard that Roger didn’t want to be a dad, so I felt like he didn’t want me. I now know he tried to see me a couple times but kept getting shut down. That was hard to hear. But to hear that all Roger wanted was to be a dad, that’s huge.”

Jason was also amazed to learn more about his dad’s personality and interests, such as his love of music. “Music is my life”—Jason is now a piano and voice teacher in Orange County—“so to hear more about that was cool. And to learn that he was goofy and very tall. My whole family on my mom’s side is short, so I feel like Roger and I have some of the same traits.”

Indeed. “He’s gay too!” Chris says of first communicating with Jason. “I was like, Oh plot twist! In a way, it’s so refreshing because there’s less explanation and maybe even more sharing. I don’t need to explain why his dad liked Bette Davis or gay camp—Jason gets it.”

Jason shared his news with the followers of @TheAIDSMemorial in a new post. It read: “UPDATE! A few days ago, I posted a picture to @TheAIDSMemorial of my late father, Roger Vasquez, holding me as a baby. I mentioned he had a partner/boyfriend who took care of him the last couple years of his life and I have been looking for him for years. And because of this amazing Instagram page, @chrispim found me! We spoke on the phone last night and he told me stories of my Dad and told me about their love story. He loved my dad so much! And still does! He is an amazing man! I can’t wait to keep learning about my Dad’s life. I am so grateful he found me!”

In putting his relationship with Roger into context with the rest of his life, Chris acknowledges that “it’s hard to lose someone you love and who is a beautiful human being. And it’s not like we were perfect—we would fight—but the memory of his love pulled me through a lot and set the tone for my love life. I was lucky to have him. And giving Jason his dad’s history, the things I can remember, I feel like it’s just one last thing I can do for Roger.”

“I’m glad Chris was there to take care of him,” Jason says of his dad’s last days. “Chris seems like he was head over heels in love with him. That’s the biggest thing for me, how much they loved each other. The bulk of this story is their love story.”

In related news, The Recollectors is a digital community dedicated to remembering parents lost to AIDS. Recent stories are posted on their Facebook account. POZ profiled the group and its two founders in a 2015 cover story titled “Meet the Parents.”