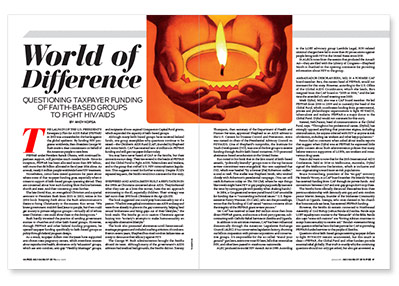 
The launch of the U.S. President’s Emergency Plan for AIDS Relief (PEPFAR) in 2003 was a watershed in the battle against the global epidemic. By funding HIV programs worldwide, then-President George W. Bush made a clear commitment on behalf of the American people to save lives.

PEPFAR under President Barack Obama, with continued bipartisan support, still provides much-needed funds. Since its inception, PEPFAR has been allocated more than $59 billion, with more than $6 billion allocated in fiscal year 2014 alone. As a result, nearly 8 million people worldwide have HIV treatment.

Nonetheless, critics have raised questions for years about where some of that taxpayer funding goes, especially when it comes to support of faith-based groups operating abroad. They are concerned about how such funding blurs the line between church and state. And their concerns go even further.

The late David Kuo, an evangelical Christian and a special assistant to President Bush from 2001 to 2003, writes in his 2006 book Tempting Faith about the Bush administration’s desire to bring Christianity to the masses. Kuo wrote: “We knew government couldn’t feed Jesus to people, but if we could get money to private religious groups—virtually all of whom were Christian—we could show them to the dining room.”

As a result, taxpayer dollars over the years have supported anti-choice crisis pregnancy centers, which misinform women about reproductive health; abstinence-only “education” groups, which are anti-condom; anti-gay “Healthy Marriage” groups; and recipients of now-expired Compassion Capital Fund grants, which expanded the capacity of faith-based groups.

Although many faith-based groups have received federal funds, one group exemplifies why questions continue to be raised—the Children’s AIDS Fund (CAF), founded by Shepherd and Anita Smith. CAF has received tens of millions in PEPFAR funding and still gets taxpayer dollars today.

You may have never heard of CAF or the Smiths, but their connections run deep. Their ties extend to the heads of PEPFAR and the Global Fund to Fight AIDS, Tuberculosis and Malaria, and to the group that crafted U.S. HIV criminalization legislation. This suggests a need for further scrutiny. Despite POZ’s repeated requests, the Smiths would not comment for this story.

Shepherd and Anita Smith built a reputation IN the 1980s as Christians concerned about AIDS. They fashioned what they saw as a love-the-sinner, hate-the-sin approach ministering to the ill, especially children. Their strategy was laid out in their 1990 book Christians in the Age of AIDS.

The book suggested one could pray homosexuality out of a person: “The first evangelical ministries to see AIDS and respond were those already in place in the gay community, helping heal sexual brokenness and bring gays out of their lifestyles,” the book reads. The Smiths go on to caution Christians against buying into “society’s attempts to make homosexuality an acceptable alternative lifestyle.”

The book also promoted abstinence-until-heterosexual-marriage programs and included scathing criticism of condoms. Even in recent years, Shepherd has cited condom failure rates as a way to denounce their efficacy against HIV.

The George W. Bush administration brought the Smiths aboard its team. Although many of the government’s AIDS advisors had medical backgrounds, the Smiths did not. Tommy Thompson, then secretary of the Department of Health and Human Services, appointed Shepherd as an AIDS advisor to the U.S. Centers for Disease Control and Prevention. Anita was named co-chair of the Presidential Advisory Council on HIV/AIDS. One of Shepherd’s nonprofits, the Institute for Youth Development (IYD), was one of the first groups to receive funding through Bush’s faith-based initiatives. IYD promoted abstinence-based sex education in the United States.

Kuo noted in his book that in the first round of faith-based awards, “politically friendly” groups rose to the top because review committees were evangelical. Kuo was surprised that IYD, which was headed “by a former [Pat] Robertson staffer,” scored so well. That staffer was Shepherd Smith, who worked closely with Robertson’s presidential campaign. (You can still catch Robertson today on The 700 Club, where he says things like towels might have HIV or gay people purposefully transmit the virus by cutting people with jewelry when shaking hands.)

In 2004, a Congressional review panel found CAF unsuitable for funding due to “outstanding technical issues.” U.S. Representative Henry Waxman (D–Calif.), who ran the proceedings, wrote that the funding of CAF raised “serious concerns about the integrity of the PEPFAR grant review process.”

Yet CAF has received at least $45 million since then from direct PEPFAR grants, and more as a third-party grantee, subcontracting with Catholic Relief Services in Zambia and Uganda.

In addition to its activities overseas, CAF has been influential domestically through the American Legislative Exchange Council (ALEC). It’s a conservative legislation factory, churning out bills in cooperation with private corporations and conservative groups. It’s responsible for the so-called “stand your ground” gun laws, restrictive voter ID laws, bills that criminalize HIV, and other laws passed in statehouses nationwide.

ALEC produced its model HIV Assault Act in 1989. According to the LGBT advocacy group Lambda Legal, HIV-related criminal charges have led to more than 80 prosecutions against people living with HIV in the United States since 2010.

In ALEC’s notes from the session that produced the Assault Act—they are filed with the Library of Congress—Shepherd Smith is thanked in the opening comments for providing information about HIV to the group.

Ambassador Deborah Birx, MD, is a former CAF board member. Birx, the current head of PEPFAR, would not comment for this story. However, according to the U.S. Office of the Global AIDS Coordinator, which she leads, Birx resigned from the CAF board in “2005 or 2006,” and the last time she attended a board meeting was 2003.

Mark Dybul, MD, also was a CAF board member. He led PEPFAR from 2006 to 2009 and is currently the head of the Global Fund, which coordinates funding from governmental, private and philanthropic organizations to fight HIV/AIDS, tuberculosis and malaria. PEPFAR is a major donor to the Global Fund. Dybul would not comment for this story.

Instead, Seth Faison, head of communications at the Global Fund, says, “Throughout his professional career, [Dybul] has strongly opposed anything that promotes stigma, including criminalization, for anyone infected with HIV or anyone at risk of infection, including sex workers and other key populations.”

Faison had no comment when asked about media reports that suggest when Dybul was at PEPFAR he expressed little public concern about Bush administration policies that many believe were not supportive of LGBTs, sex workers and intravenous drug users.

Faison did want to note that for the 20th International AIDS Conference, held in 2014 in Melbourne, Australia, Dybul signed the Melbourne Declaration, which is inclusive and non-stigmatizing toward most at-risk populations.

Bruce Sonnenberg, president of the “ex-gay” ministry He Intends Victory, is a CAF board member. He Intends Victory has received funding from CAF through its private funds. And connections between CAF and anti-gay groups don’t stop there.

The Smiths have officially distanced themselves from their previous relationship with famously anti-gay and anti-condom pastor Martin Ssempa, founder of the Makerere Community Church in Uganda. Ssempa, who once claimed in his church that homosexuals eat feces, has received PEPFAR funding.

However, the Smiths do remain connected to Northmead Assembly of God Bishop Joshua Banda of Zambia. Banda says LGBT equality runs counter to the “demands” of the Bible. Banda also says “some rich nations” are “forcing African countries to accept homosexuality to receive aid.” Banda’s statements bring into question whether he is the best partner for CAF in providing PEPFAR-funded services to the people of Zambia.

Questions about faith-based groups receiving taxpayer dollars to fight HIV/AIDS remain unanswered, but this much is clear—PEPFAR, the Global Fund and other funders provide essential relief globally. That truth is exactly why the continuing questions should not only get asked, but also get answered.