Teenage men who have sex with men (MSM) adhered well to the daily regimen of Truvada (tenofovir/emtricitabine) as pre-exposure prophylaxis (PrEP) when monitored monthly in a recent study, but their adherence declined when switched to quarterly monitoring. They ultimately contracted HIV at a high rate.

Results from the open-label ATN 113 study, which recruited participants ages 15 to 17 in six U.S. cities between August 2013 and September 2014, were presented at the 21st International AIDS Conference in Durban, South Africa (AIDS 2016).

PrEP is not approved in the United States for individuals under 18.

A total of three participants contracted HIV during the study, for an HIV infection rate of 6.41 percent per year.

A majority of the participants reported condomless sex throughout the study. The researchers did not find an association between condomless sex and adherence. Those who were nonadherent were significantly more likely to report being worried that people would think they were HIV positive if they saw their Truvada pills, compared with those who adhered well.

Overall, adherence dropped considerably once the study switched from monthly to quarterly clinic visits. At weeks 4, 8, 12, 24, 36 and 48, the proportion of the participants who took at least four tablets of Truvada per week according to dried blood spot testing was a respective 60 percent, 52.4 parent, 55 percent, 31.5 percent, 22.7 percent and 28.21 percent. Previous research has found that taking Truvada four or more times per week confers maximum protection against HIV. Adherence rates were not significantly different based on the race of participants.

Previously, the ATN 110 study of PrEP among 18- to 22-year-old MSM found moderate adherence among the group but also saw adherence drop over time. Adherence among black and mixed-race participants in that study was very poor.

The researchers in the new study concluded, “Regulatory approvals for youth under 18 are required to foster support for youth-friendly settings that will optimize PrEP use.”

Sybil G. Hosek, PhD, s clinical psychologist at Stroger Hospital of Cook County in Chicago and the study’s head researcher, stresses that the initial adherence levels among the partcipants were actually remarkable for their age—95 percent had detectable drug levels during the first 12 weeks of the study—and that the drop-off in adherence once the study switched to quarterly monitoring was not a surprise to her.

“Adolescents need to feel connected and three months can feel like a lifetime,” she says. “We need to do better by providing them with the time and attention they need to do PrEP well. Oral PrEP won’t work for all youth, just like it won’t work for all adults. But for some it will be a perfect fit.” 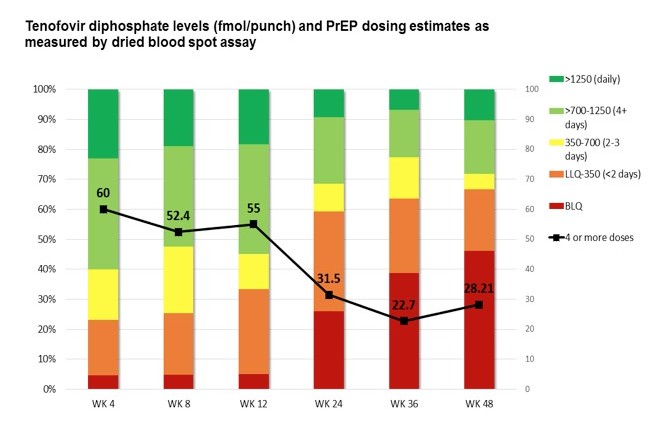