Findings from the open-label phase of the IPERGAY trial, which previously found that the dosing strategy was associated with an 86 percent reduction in HIV risk, were presented at the 21st International AIDS Conference in Durban, South Africa (AIDS 2016).

The open-label phase of the study ran from November 2014 to June 2016 in France and Canada. At the study’s outset, participants reported having had condomless sex with at least two men during the previous six months. They also had good kidney function according to creatinine clearance. They made clinic visits every two months. The analysis presented at the conference concerned the open-label phase through its completion.

Out of 400 MSM initially enrolled in the placebo phase study, 336 (84 percent) were eligible for the open-label phase, with all but three (99 percent) signing a new consent form to continue in the study. A total of 362 people were ultimately enrolled in the open-label phase, including 29 new participants, and 299 completed follow-up through June 2016. Between them, the participants contributed 515 years of follow-up, for an average follow-up time of 18.4 months.

Making such a comparison with a non-concurrent placebo phase is not necessarily the most scientifically rigorous means of calculating a risk reduction, but it is not without precedent in PrEP research. A similar calculation was made in the Partners PrEP study, also presented at AIDS 2016, which found that using PrEP as a “bridge” to HIV treatment in mixed-HIV status heterosexual couples was associated with a 95 percent reduction in transmission risk.

The man who contracted HIV had not used PrEP for months and was in a stable relationship with a man who also tested positive. He was started on antiretroviral treatment three days after testing positive.

The men in the open-label phase of the IPERGAY trial took an average of 18 pills per month. Previous research has shown that taking Truvada four times a week yields maximum protection against the virus. The men also went through cycles of starting and stopping taking PrEP throughout the study, so they were not always consistent with taking Truvada with at least some regularity per week.

“I think we have now enough evidence that this dosing regimen works,” says study coordinator Jean-Michel Molina, MD, of the Hôpital Saint-Louis, in Paris.

Thirty-nine percent of the men acquired a new sexually transmitted infection (STI) during the open-label phase. There was no significant difference in the men’s median number of reported episodes of sexual intercourse or sexual partners between the placebo and open-label phases.

Forty of the men (10 percent) experienced a serious adverse health event during the open-label phase. Three participants stopped taking Truvada because of a decrease in creatinine clearance, an indication of impaired kidney function (one of Truvada’s potential long-term side effects, along with reduced bone density). Forty-eight participants (13 percent) reported gastrointestinal problems, mostly nausea and vomiting and diarrhea but also abdominal pain.

The researchers concluded that the high rate of STIs among the population “needs to be addressed” and that “PrEP improved pleasure and removed fear during sexual activity.” 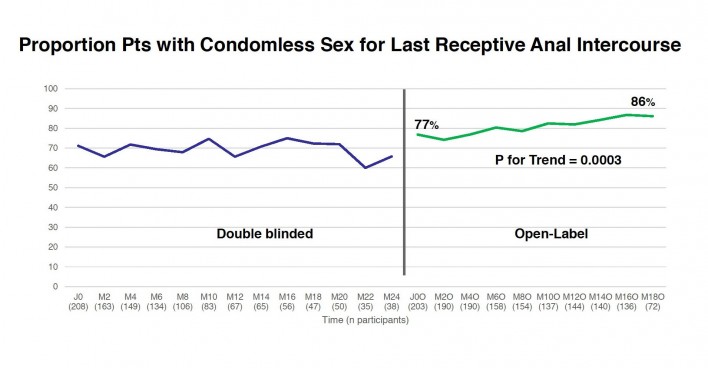