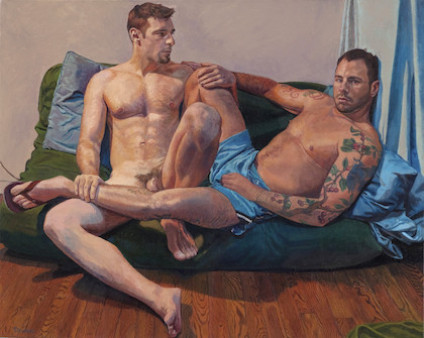 An exhibition of HIV-positive artists celebrates their passions and also honors the life and legacy of Keith Haring.

For the past six years, Gay Men’s Health Crisis (GMHC) has been presenting Art & AIDS exhibitions in partnership with the Leslie-Lohman Museum of Gay and Lesbian Art in New York City. This year’s show, titled Art & AIDS: Amor y Pasión (Love and Passion), is curated by David Livingston and myself, who are GMHC clients and volunteers. The show is an outcome of the weekly art classes offered by GMHC’s Volunteer, Work and Wellness Center and also of the artists who’ve come to GMHC for help and support after learning about their own diagnosis. The exhibition features more than 45 artists, who are GMHC clients displaying their talent and emotions through painting, drawing, photography and sculpture. (All the works shown here are part of the current Art & AIDS exhibition.)

The current show also honors Keith Haring for his artistic talent and legacy to the HIV/AIDS community, marking the 25th anniversary of Haring’s death from AIDS complications on February 16, 1990. For this occasion, GMHC and the museum collaborated with the Keith Haring Foundation to display Keith Haring’s “Bad Boys” series. The silkscreens, created in 1986, display Haring’s explicit homoerotic expression and pride of his sexual orientation at a time when many were getting diagnosed and dying. The Keith Haring Foundation has also allowed us to display a black and white portrait of the artist taken in 1984 by his friend Robert Mapplethorpe, who died of AIDS complications in 1989.

In conjunction with the exhibition, the museum is hosting two additional free events for the general public. Last week, Leslie-Lohman presented “ArtAIDSAmerica,” a conversation with Jonathan David Katz, the curator of an upcoming national museum exhibition showcasing 30 years of art responding to the AIDS epidemic in the United States. The exhibition, also titled ArtAIDSAmerica, will open June 2015 through 2017 and travel across the country, including stops at the Tacoma Art Museum, the Museum of Contemporary Art in Los Angeles, and the Bronx Museum as well as venues in San Francisco and Atlanta.

On Thursday, January 29, from 6 to 8 p.m., the Leslie-Lohman Museum will host a film screening and discussion on the documentary The Universe of Keith Haring, an intimate portrait of the world-renowned artist whose mantra was that “art is for everyone!” The 90-minute film is a thorough and intimate exploration of the background and career of one of the most popular and significant artists of the 20th century. Julia Gruen, executive director of the Keith Haring Foundation, will lead a post-screening discussion with the audience. The artist founded the Keith Haring Foundation in November 1989, a few months before his death. The foundation’s mission is to support nonprofit organizations that assist children as well as organizations that are involved in HIV/AIDS-related education, research and care.

At the January 22 opening reception of Art & AIDS, members of the Imperial Court of New York, a longstanding group that raises funds for community-based organizations and that’s famous for its drag queens, volunteered to greet the guests.

The evening was a smashing success, filling the space to capacity and setting a record for the museum’s opening reception attendance. The festive audience mingled as they discussed their favor pieces; others kept busy buying art, which is well priced and mostly available for sale—plus, 100 percent of the sales goes to the artists, allowing them to increase their financial independence, which is particularly important for those who live on a limited income. What’s more, artists in the show are now able to participate in additional art shows as most galleries mandate that artists must have already been part of one show.

“For many of the artists, participating in the art classes is a healing experience to express emotions about living with HIV and AIDS and the epidemic overall. In fact, for some, this will be the first time ever exhibiting artwork in this renowned gallery. We are so appreciative of the Leslie-Lohman Museum of Gay and Lesbian Art’s ongoing generosity,” said GMHC CEO Kelsey Louie.

“AIDS and HIV have been a subject for many gay artists for the last 30 years and have, unfortunately, become a recognized theme in gay art history,” said Hunter O’Hanian, the museum director at Leslie-Lohman. “While this work continues to be made, we will be happy to display it. Our relationship with GMHC has been a long fruitful one, and we hope it continues for many years.”

The exhibition includes a very popular Silent Auction Wall to benefit the programs at GMHC. The silent auction displays eight art pieces donated by the participating artists, as well as a limited edition screen print of Keith Haring made in 2010 by Shepard Fairey and donated by the Keith Haring Foundation. Fairey became widely known during the 2008 presidential election for his Barack Obama “Hope” poster.

The silent auction is a quick reminder that AIDS is not over, as Robert Getso, who passed away December 21, 2014, created one of the pieces on this wall. The opening reception was dedicated to Getso as a tribute to his life from his friends at GMHC. The silent auction ends at 6 p.m., Sunday, February 1.,You can make a bid at the museum or by contacting Leslie-Lohman directly.

The visual art in this exhibition also sends a message that AIDS is not over and that stigma is something many people living with the virus still experience. The exhibition also gives the artists a chance to display how their art celebrates life, history, beauty, sexuality and spirituality as it pushes struggle with optimism, love and passion.

Admission to the exhibition is free. It runs through Sunday, February 1, and is located at 26 Wooster Street (between Grand and Canal) in Manhattan. Show your support for this wonderful group of artists—and for GMHC and the Leslie-Lohman Museum of Gay and Lesbian Art, all of which continue to bring strength to the HIV-conscious art scene. Visit GMHC.org for more information.

Osvaldo Perdomo is co-curator of art exhibitions for GMHC and is a GMHC board member.