A legal case against Gilead Sciences and three other drug companies took another step forward on September 5 with its first hearing before Judge Edward M. Chen of the United States District Court for the Northern District of California.

In a lawsuit filed in May, a group of advocates and union health funds allege that Gilead and its collaborators—Bristol-Myers Squibb (BMS), Janssen (a subsidiary of Johnson & Johnson) and Japan Tobacco—illegally established a near monopoly on HIV combination pills by restricting generic competition, thereby keeping drug prices artificially high.

“This was a corruption of the consolidation process by Gilead and its coconspirators to corner the one-pill-a-day market with agreements that included blatantly anticompetitive language that will not stand up to a constitutional view of antitrust activity,” lead plaintiff and longtime activist Peter Staley said in an interview following the hearing.

Gilead counters that its actions were in keeping with federal law and paved the way for the development of innovative new therapies for people living with HIV. The company has filed a motion to dismiss the case.

“The lawsuit filed against Gilead and three companies we partnered with to develop new medicines distorts and misstates Gilead’s history and its collaborations with these partners,” Gilead said in a statement. “The allegations against Gilead are misguided and do not accurately reflect antitrust laws or Gilead’s history of innovative collaboration and competition in HIV medicines.”

The plaintiffs have requested a jury trial. They are asking that the companies’ collaboration agreements be rewritten and for Gilead to make a generic version of its tenofovir alafemanide (TAF) available ahead of the current patent expiration schedule.

At the initial hearing, lawyers for the defendants sought to have the case transferred to another judge and to delay the process of discovery, which would require the companies to provide thousands of legal and marketing documents and communications spanning more than a decade. Both requests were denied. The next hearing in San Francisco is scheduled for November 6, after Judge Chen reviews the defendants’ request for dismissal.

Gilead is also facing unrelated legal actions from activists, including patent challenges against Truvada for pre-exposure prophylaxis (PrEP) and a lawsuit alleging that the company kept TAF, a safer new version of its drug tenofovir disoproxil fumarate (TDF) off the market until the patent was about to run out on TDF.

The issue in the class action lawsuit is agreements between Gilead and its codefendants to develop single-tablet regimens that combine multiple antiretrovirals in a single once-daily pill, which increases convenience and potentially improves adherence. 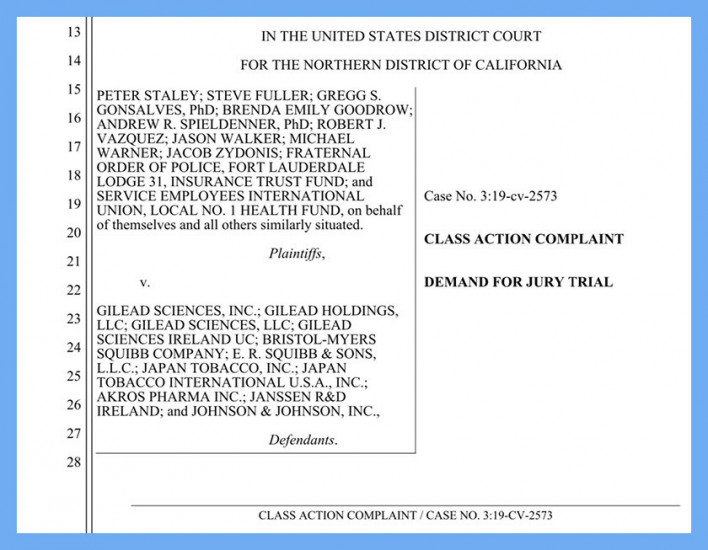 Gilead’s TDF was approved by the Food and Drug Administration in 2001, initially as a stand-alone product called Viread. TDF and Gilead’s emtricitabine are combined in Truvada—widely used for both HIV treatment and PrEP—and are the common ingredients in the first-generation single-tablet regimens Atripla (which also contains BMS’s efavirenz), Complera (containing Janssen’s rilpivirine) and Stribild (containing elvitegravir, licensed from Japan Tobacco). More recently, Gilead has focused on newer coformulations (Biktarvy, Genvoya, Odefsey and Symtuza) that include TAF, which is less likely than TDF to cause kidney and bone side effects.

Generic versions of TDF and lamivudine—a drug widely thought to be functionally equivalent to emtricitabine—are used in single-tablet regimens from companies not named in the lawsuit, including Merck’s Delstrigo and Mylan’s Symfi.

But the defendant companies agreed that as long as any component of the Gilead coformulations remained under patent, they would not create competing combination pills that contain their ingredients plus generic components or allow anyone else to do so.

“Collectively, the unlawful agreement between Gilead and each of its coconspirators effectively foreclosed competition for drugs essential to [combination antiretroviral therapy] regimens,” according to the plaintiffs’ filed complaint.

This practice, the plaintiffs allege, led to the current situation in which nearly 90% of people newly diagnosed with HIV use a Gilead product. What’s more, they claim the near monopoly has kept prices high and impeded access to treatment. They estimate that a single-tablet regimen containing generic components would cost around $20,000 per year, compared with about $35,000 for the current proprietary coformulations.

Coplaintiff Brenda Goodrow, who was born with HIV, has spent her life on antiretroviral medications, has developed resistance to most of them and has limited options for salvage therapy. She sometimes struggles to pay for her treatment and says she would benefit from the lower prices that would come with increased pharmaceutical competition.

“Last year, I lost my Medicaid and was out of medicine, and the pharmacy technician refused to order it when she saw the price if I didn’t have proof I could pay for it,” Goodrow said in an interview. “I applied for patient assistance programs, but who knows how long that would take? That was terrifying for me, not knowing how long I would have to go without my medicine because I couldn’t afford it.”

Added Staley, “The bottom line is that there’s a relationship between drug prices and the fact than only half of people with HIV in the U.S. are undetectable. That’s one of the lowest [rates of viral suppression] in the developed world—even some African countries are higher.”

Coplaintiff Robert Vazquez, also a longtime activist, argued that the anticompetitive agreements have stifled innovation as well as raised prices.

“There were many companies looking at many different strategies, but now one company dominates. One company scooping up all the profits discourages others from doing research,” he said. “This shows the profound problem with the American health care system. Health care should not be a business—health care is a right. You shouldn’t have to have money in the bank to get the medications you need to live.”

For its part, Gilead disagrees with the plaintiffs’ assertions.

“With its own compounds and in combination with those of its partners, Gilead has helped to bring nearly a dozen new combination medicines to people living with HIV over the course of the last 15 years. Most of these medicines would not have been possible without the partnership between Gilead and the other companies,” the company said in its statement.

“When the complaint is stripped of its pejorative characterizations and baseless conclusions, what remains is an account of lawful competition, including through joint ventures and other collaborations between Gilead and other pharmaceutical companies,” according to the defendants’ motion to dismiss the case. “In each instance, the factual allegations of the complaint, even when fully accepted as true, establish that Gilead’s conduct was well within the parameters of established law.”